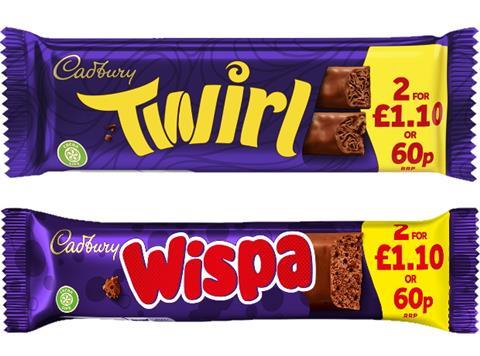 Mondelez International is helping retailers drive sales in the singles category with the launch of a new price-marked pack (PMP) running across some of Cadbury’s bestsellers: Twirl, Boost, Wispa, Wispa Gold, Double Decker and Crunchie. From July the limited-edition PMP packs will help retailers capture shoppers’ attention in store with striking ‘2 for £1.10 or 60p RRP’ labelling.

PMPs offer a number of advantages for retailers, generating a perception of improved value and trust from shoppers, claims Mondelez, adding that nearly a third of all bars sold in independent and symbol stores are Cadbury bars. The firm claims Cadbury bars sell on average at a rate of four units per second in the channel [Nielsen data, Independent & Symbol stores, MAT 22.05.21].

The new PMPs will drive excitement among shoppers and encourage incremental purchases, states Mondelez. The on-pack promotion will be running for only three months.