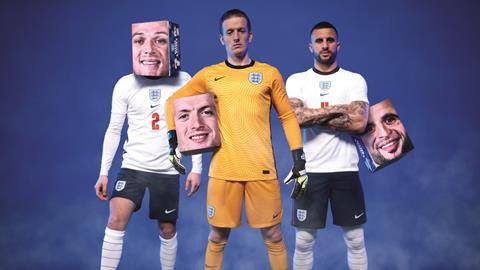 Bud Light has announced the new Boxheads brand campaign to celebrate its role as the Official Beer of the England Men’s Team.

From May, all Bud Light packs of 12 and 20 bottles sold in England will feature the faces of Jordan Pickford, Kyle Walker and Kieran Trippier. The larger-than-life packs have been designed to bring some fun and lightness to international football this summer, transforming beer boxes into fanwear. Fans can wear the boxes on their heads to celebrate and support the team during the tournament. To mark its sponsorship, Bud Light has also launched a limited-edition England can design featuring The Three Lions.

Senior brand manager for Bud Light Martina Isella said: “Brands often feature the face of their ambassadors on packaging but Boxheads takes it to another level. There simply isn’t anything like it out there. It’s a revolutionary step forward in beer packaging, and we can’t wait to see football fans across the country wearing Boxheads and supporting The Three Lions in a much more fun and immersive way.”

The Boxheads launch is supported by a fully integrated ATL and social marketing campaign, designed with the ambition of Bud Light becoming the Vuvuzela of 2021 (but less annoying!)