Police are appealing for information following an ATM ram-raid at a Londis-branded forecourt in Suffolk. 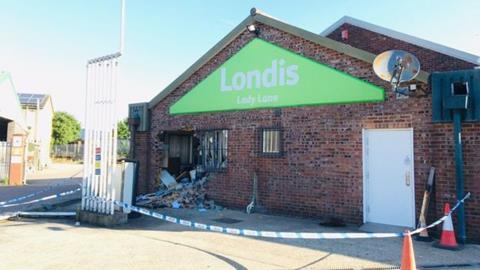 The incident happened at the forecourt on Lady Lane in the town of Hadleigh at around 3:10am on 5 July.

According to Suffolk Constabulary, a white Nissan Primastar van was used to pull the wall away from the side of the store. Once inside, a safe was removed and left behind, with an amount of cash stolen from within.

The incident caused “significant damage” to the building and the offenders made off in the van, which was later reported to have been found on fire in Gippeswyk Park, Ipswich.

Officers believe that the same van which was stolen from Martens Lane, Polstead, on Thursday 27 June.

The incident follows a number of recent ATM thefts across the UK, including an ATM ram raid at a Co-op Group store in Oxfordshire and an ATM explosion at Budgens Mortimer near Reading.