Nottinghamshire Police are appealing for information following an ATM ram-raid at a Co-op Group store in Nottingham. 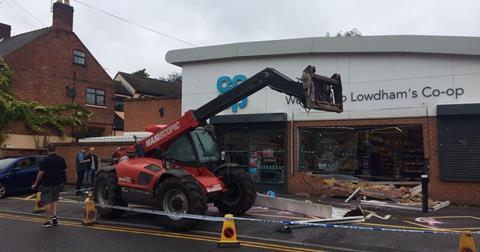 Nottinghamshire Police are appealing for information following an ATM ram-raid at a Co-op Group store in Nottingham.

The incident happened at the store on Street in the village of Lowdham at around 4am on 16 September.

According to police, a farm vehicle was used to steal a cash machine, causing damage to the store. A black van and a white car were also seen leaving the scene.

A Nottinghamshire Police spokesperson said: “Officers would particularly like to hear from anyone who lives on Epperstone Road who may have CCTV which could help the investigation.”

The incident follows a number of recent ATM thefts across the UK, including an ATM ram raid at a Co-op Group store in Oxfordshire and an ATM explosion at Budgens Mortimer near Reading.

Anyone with information about the incident should contact Nottinghamshire Police on 101 or contact the independent charity Crimestoppers anonymously on 0800 555111.