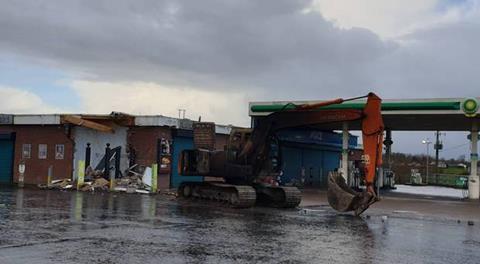 Police are appealing for witnesses following an ATM ram raid at a filling station in County Tyrone, Northern Ireland.

The incident happened at the store on Ballygawley Road in the town of Dungannon at around 4:15am on 10 March.

According to the Police Service of Northern Ireland (PSNI), a group of thieves used a digger to remove a cash machine from the petrol station, causing substantial damage to the building.

Detective inspector, Trevor Stevenson, said: “We believe the digger was stolen from a business a short distance away, which caused damage. The digger was set alight at the scene immediately after the theft.

“I am appealing to anyone who was in the area between 4am and 4:15am and saw what happened, or who has information which could assist our investigation to call us.”

The incident followed a number of recent ATM thefts across the UK in the last 12 months, including an attempted ATM ram raid at a Spar store in Moray and a 90-second ram raid in Birmingham.

Anyone with information about the incident should contact Omagh CID by calling 101, quoting reference 340 of 10/03/19.Alternatively information can also be provided by calling the independent charity Crimestoppers on 0800 555 111.