Vape sales through unaffiliated retailers have grown by almost 30% year on year, comfortably ahead of symbol group stores which grew their sales by 22.8%, according to new category data to 20 October 2019 from IRI. 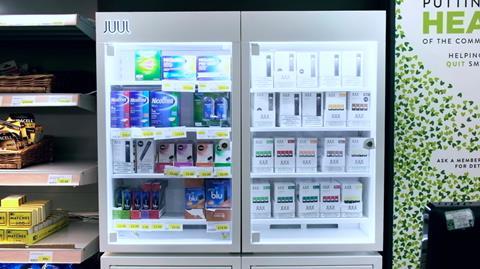 However, vape sales through unaffiliated and symbol group stores still lag behind the multiple channel which, according to the same data, posted year on year growth of 37%.

Together unaffiliated and symbols have a combined 28.2% of the traditional retail sector vape sales.

Multiple retailers continue to have the majority of vaping sales with a market share of 62%.

Earlier this year Sainsbury’s became the first multiple retailer to reposition vape products within its shop-floor healthcare aisles where they benefit from improved visibility.

Multiple retailers have also been quicker to invest in the closed pod market, which has increased its share of the total vape market from 12.5% to 31.6% over the same period according to IRI.

Meanwhile, e-liquids, which are still in growth, have seen their overall share decline from 47.7% to 39.6%.

“The past year has seen solid growth in the vape category within independent and symbol stores as more retailers embrace the category and current vape retailers enhance their range,” he said.

“However, despite sales up 26%, the independent and convenience channels are still underperforming in the vape category. This time last year, closed systems accounted for just over 6% of all vaping sales through independents and convenience stores. Today, that figure is in excess of 28%.

“Although open system is still the dominant sector and should be a major part of any vape offer, the gap is narrowing rapidly as closed pod systems such as Juul become the systems of choice for adult smokers looking to switch from combustible tobacco products.

“One of the main reasons the multiples are pulling ahead is that they embraced closed pod systems earlier and closed systems now outperform open system sales in their stores.

“The convenient nature of these products means that they are ideal for convenience stores and many more retailers should be making them the hero in their vaping fixture.”

He said closed pod systems were driving 80% of the total market growth in traditional retail.

”Although independents and symbols have 28% of this sector, if we include specialist vape and online stores, their combined vape share is estimated to be in the region of 12%,” Patterson added.

“The opportunity lies in these stores getting the same share of vape as they have in tobacco - which is around 45%.”