With the first Track and Trace-compliant tobacco packs expected to hit wholesalers by the end of this month, convenience retailers continue to be plagued by code application woes. 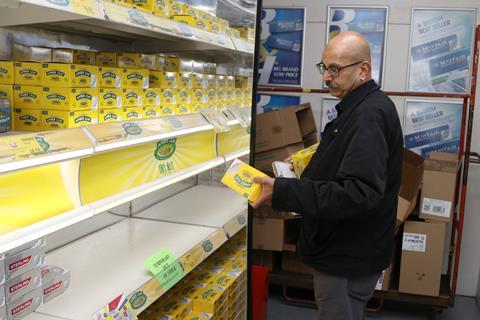 Retailer at a Bestway cash & carry

A large number of retailers who applied for their Economic Operator Identifier Code (EOIC) and Facility Identifier Code (FIC) via their wholesalers remain “in the dark” about the status of their applications, with many claiming that the UK’s ID Issuer De La Rue is struggling to cope with the large volume of applications sent in by wholesalers.

Sitarambhia, who had applied for his codes via Bestway, recently received a letter from the wholesaler which said that his application for an EOIC and FIC had been “rejected” by De La Rue.

“I just don’t know which way to turn anymore,” he said. “I’ll just have to take the letter to my local depot and see if they can help me there.”

The letter also stated that De La Rue was “no longer taking bulk applications,” he added.

Another retailer from Manchester, who did not wish to be named and also applied through Bestway, said he had still not received either of his codes.

Jag Patel, who runs Rodley Stores in Leeds, was also told in a letter that Bestway would no longer be able to complete his application for him.

Jag, who had already received his EOIC, was told by Bestway that he would now have to apply for his FIC individually.

However, as C-Store went to press, Jag unexpectedly received his FIC from Bestway.

“Obviously I’m pleased that the problem is sorted but it’s frustrating that the whole thing has been so confused and unnecessarily stressful. It’s like no one knows who is doing what, on behalf of who,” he said.

Meanwhile, Londis retailer Hiral Patel, from Claygate in Surrey, was also waiting to receive his codes – which he applied for “weeks ago,” through the Londis Webshop.

“Customer services have just told me to wait as apparently there’s a huge back log,” he said. “I expect help from Londis if there are any issues though as I buy my tobacco direct from them.”

“The application process for economic operators continues to perform efficiently,” a spokeswoman said.

“The bulk integration has been successfully completed and any Economic Operators who still require to register on DLR ID Issuer should do so via the web portal. https://eutpd.uk.delarue.com/login,” she added.

The first Track and Trace-compliant tobacco packs are expected to reach depots by the end of June, with Players Gold Leaf expected to be the first to arrive.

The new packs will include unique identifiers and additional security features.

Retailers can continue to buy and sell non Track and Trace-compliant stock until 20 May 2020.