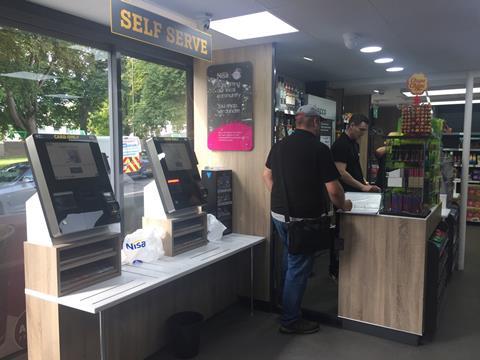 Dave Hobbs, who owns the store with his father Tony in the town of Larkhill, has seen customers react well since installing two Evolution SCOs last week.

“We spent a couple of days demonstrating how the tills work, but they are pretty straight-forward, and our customers have now got into the habit of using them already,” Dave said.

“It means we can have just one member of staff at the counter, giving us more time to put out stock and do other jobs elsewhere in the store.”

The new tills have been added to the existing Nisa Evolution EPOS system, accompanying the two tills already operating on the main counter, enabling the retailers to better manage shoppers in their store where queues can build quickly.

“We are situated just outside a military base and it is a very busy little store,” Dave continued. “Because of the army we often will get minibuses pulling up and 20 to 30 soldiers coming into the shop all at once and so we were really struggling with only the two main tills.

“We had planned to put self-service tills in and so were pleased when Nisa said they were going to start building and installing them.”

The SCO attendant station is on the existing counter, meaning customers can be assisted, age-related sales authorised, and transactions transferred to the manned till to complete if needed.

Jonathan Peaker, epos sales manager, added: “With consumers now leading the trend for smaller, more frequent and convenient shopping, installing an SCO gives customers the choice of fast self-service that many now expect in store, or the more personal service that Nisa partners and their staff will continue to provide through a manned till point.

“We were delighted to showcase our Evolution Self-Checkout at Nisa’s annual exhibition at Stoneleigh earlier this year and so it is fantastic to have now completed the successful first installation in a partner’s store.”