C-store retailers have reflected on the impact of the National Lottery to their businesses since its launch 25 years ago. 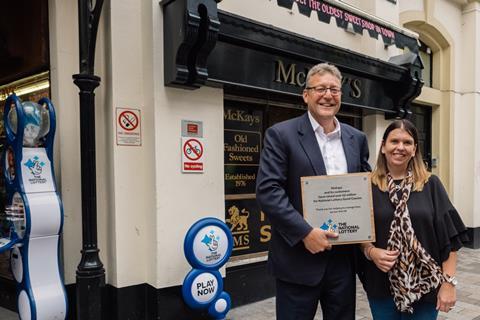 To mark the 25th anniversary, National Lottery owner Camelot has awarded over 3,000 Good Cause plaques to retailers who have helped raise over £1m for Good Causes, and sent out personalised posters to all 44,000 retailers detailing how much they’ve raised for Good Causes.

Derrick Cooke, owner of Londis, Malvern, has been a National Lottery retailer for the past 25 years.

“As one of the very first retailers, the launch of The National Lottery was such a big thing – it was a revelation and one of the major things in UK history,” he said.

“Generally the National Lottery in our store has gone well, it’s been popular and evolved. It’s been successful and it is great to be a part in the success.”

Richard Barron, who owns six Spar stores in and around Chesterfield, said the Lottery had become a key part of the business over the past 25 years.

“It’s been an easy way to make a bit of extra money. It’s fool proof and worked for years. It probably makes us tens of thousands of pounds a year. We make more money in the blue collar areas rather than in the more affluent areas, especially with scratchcards,” he added.

“We’ve had smallish winners over the years. As you can cash your ticket at any store, we’ve cashed more than our share. Some weeks more goes out than comes in so for some stores I imagine it can be a cashflow issue but we get refunded quickly.”

“The National Lottery has played a big role in our business over the years and is still an important footfall driver for us today and sales are steady.”

Jamie Patel, owner of Weybridge News in Surrey, said the Lottery’s positive impact on his store had lessened recently since local supermarkets had introduced it.

“The National Lottery has played a big role in our business over the years and is still an important footfall driver for us today and sales are steady,” he said.

“However, we don’t see the pronounced spikes in ticket sales that we used to when there was a big jackpot or new game launch. It’s impact has been somewhat weakened since Waitrose introduced it a few years ago as there is a large Waitrose next to our store and then last year Morrisons opened just around the corner and it also does the Lottery.”

Natalie McKay, owner of McKays, Belfast, added: “It’s been great selling National Lottery tickets for the past 25 years in my family’s shop. It brings in more customers and they look forward to playing every week. Some have even been playing from day one and know their numbers from memory.

“We’re actually called the ‘lucky shop’ as we had a player win the jackpot after buying their ticket here back in 1998. It was in the paper and it was all very exciting. Players started coming to the shop because they believed it to be lucky, and that name has stuck with us ever since.”

10. 50/50 split between winning a big prize by picking your numbers or by choosing a Lucky Dip

25. Drivers have won more million pound prizes than any other profession. Builders are second.