Fourpure Brewing Co. is updating and rebranding its beer line-up with a fresh look and the addition of a new crafted variant. 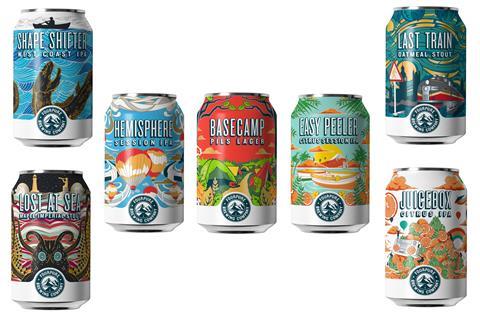 Available to c-stores and independents from this month, the rebrand includes the rollout of new packaging for the brand’s Shapeshifter West Coast IPA, Juicebox Citrus IPA and Easy Peeler Session Citrus IPA, as well as the launch of a Lost at Sea Maple Imperial Stout.

All of Fourpure’s craft beer products come in a 330ml canned format with an rrp of £2 and an rrp of £3 for the new Lost at Sea addition.

Adrian Lugg, head of marketing at Fourpure Brewing Co., commented: “I think we’ve succeeded in creating something that perfectly captures Fourpure’s character. Although our previous branding served us well over an incredibly successful six years for the brewery, we wanted to invest in a rebrand that represents where the craft beer movement is at now.

“Playing on Fourpure’s well established association with adventure, the new design really stands out on the shelf and at the bar, with eye-catching packaging that captures customers’ imaginations. Our new runway brand device and adventure inspired logo are present throughout the range, creating a slick, clean, unifying theme that will be instantly recognisable to our customers.”