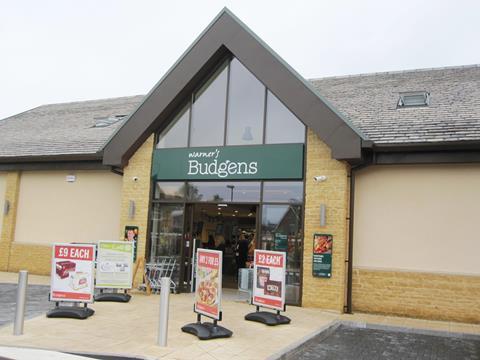 Just four weeks after opening, basket spend at Guy Warner’s new Budgens (his sixth in the Cotswolds) has already hit an average of £13. Located in the historic town of Winchcombe, Gloucestershire, the 4,300sq ft store is divided into distinct sections for top-up and take-home shopping, and the CTN, food- and drink-to-go and impulse missions. A vast fresh range is complemented by a sizeable off-licence section and bank of Cook freezers. The store is value-driven, a fact which Guy claims has made the offer “more credible, but without losing the Warner’s Budgens DNA”.

Guy describes the new value-for-money focus as a “revelation”, creating far more choice for shoppers and making the Warner’s brand “even more credible”.

One of the strongest sellers is Farm Fresh fresh chicken, currently being sold at two for just £7.

The value offer is particularly effective in non-food, which Guy refers to as his “Achilles heel in the past”. Thanks to the number of different suppliers that Booker works with, it’s become a strongpoint of the new store.

Local and freshly-baked bread is a key feature at the entrance to the store. It’s piled high in wooden boxes and set off with warm LED lighting, meaning shoppers can’t fail to add a loaf or two to baskets.

Local ales are the star of the store’s vast off-licence section, which accounts for just above 14% of sales mix.

The store also boasts a self-serve and grind coffee bean offer retailing at £2.39 per 100g with a 50% margin. Guy was sceptical about the idea at first, but says that four weeks in it’s already been “more than justified”.

Fresh is a real hero category and accounts for 50% of the sales mix, with fresh growing week on week.

The range has improved in terms of lower prices since the Booker deal, but with higher margins – up 11% on fresh overall including 25%  on fresh meat.

Booker’s catering expertise has enabled Guy to introduce new products that he’s not previously had easy access to, such as samphire.