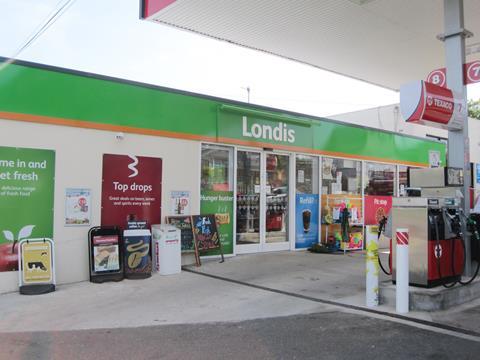 Last summer Jim and Leanne Dixon opened their new 1,200sq ft Londis forecourt store in Yealmpton, Devon, following a massive redevelopment project, which involved seemingly half the village. They had initially planned to extend rather than knock down the old store - which was turning over £4,000 on a good week - but unforeseen structural issues forced their hand. Costs rose from £175,000 to £330,000, but with dedication and local support they completed the project in their eight-week time frame. “We became labourers. I laid blockwork and cleared rubble. Every day I had a hard hat on,” says Leanne. “Even the local guys didn’t get a weekend off.”

The new store has a full grocery offer including an expansive fresh range.  “We wanted to be a c-store with a filling station attached to it,” says Jim. They are planning to move newspapers outside to further expand the fruit & veg.

When considering symbol group, they invited Mace, Spar and Londis, but opted for the latter. “The look of Londis impressed us. It’s fresh, there’s colour to it, and we liked the rewards scheme,” says Leanne. “They took the time and effort for us too.”

Within a couple of weeks of closing the shop for the refit, another unforseen event occured when Booker bought Londis. But the takeover is clearly paying off, with weekly sales up to £20,000 and rising – exceeding Londis’ expectations of £14,000 after one year, Jim says.

The Dixons have also started using farmers’ markets, especially in the summer for produce such as cauliflowers and rhubarb. “Retailers have more opportunity now since Booker’s takeover to go out and pick and choose suppliers,” says Leanne.

The produce range has increased “by far” over the past six months, she adds.

The food-to-go offer comprises a Tchibo coffee machine, as well as hot food including locally-produced pasties, an in-store bakery and sandwiches.

Customers can also enjoy freshly-made sausage and bacon baps in the morning which, combined with the coffee, is a big hit with customers.

With the quantity of fuel being sold more than doubling to 41,000 litres a week since the refit, there is a significant rise in on-the-go customers who need refuelling, too.

A Euro Shopper promotional bay for ambient grocery is displayed near the entrance.

The store sells meat from a local farm and fish from a regional supplier. “It’s caught by 24-hour trawlers, and then brought in and packaged and put on our shelves in the same day,” says Leanne. An A board outside the store advertises the fact.

The most popular product is Thatcher’s Gold cider. “Three slabs came in today and we’re down to one already,” says Jim. “They can’t get enough of it!”

The old shop didn’t have an alcohol licence, but the Dixons now sell £4,500-worth a week, with beers and white wines kept chilled.

A large selection of local ales and ciders - such as Hunt’s cider from Totness and Cornish Orchards cider - complements the big brands.

Jim prides himself on his wine selection. “I respond to customers’ requests,” he says. “I don’t do all of Londis’ promotions because it would distract me from what I want to sell, but I run the majority of them. I put Echo Falls and then Yellow Tail on promotion on end aisles, and they were a big success. People now know to go to those end aisles.”