A finely-honed product offering, first-class customer service, and a no-nonsense approach to underage sales have gained Eldred Drive Stores in Kent respect from both young and old alike

With a weekly turnover of almost £30 per square foot, excluding services, the modest-looking Eldred Drive Stores in Orpington, Kent, is one precious-gem of a store. It’s also racked up its fair share of awards in its 31 year trading history, including the Responsible Retailing accolade at this year’s Convenience Retail Awards (CRAs). The same ceremony also saw store owner Raju Patel honoured with the Lifetime Achievement Award, while avid readers of Convenience Store will recognise store manager Anita Nye as the proud winner of Sales Assistant of the Year 2015.

The small store’s impressive turnover is even more remarkable when you consider that it’s also growing year-on-year. In fact, sales are up 5% annually as Raju and Anita invest in emerging categories, including chilled goods and fresh Butcher’s Market meat, chilled and ambient Polish goods, plus locally sourced fruit and vegetables. The store even launched a small gardening range last summer including plants, hanging baskets and lawn care products. The range is “doing well”, according to the pair, and is proving particularly popular with the store’s elderly shoppers who are pleased they no longer need to travel to the garden centre or DIY shop for gardening essentials.

“My grandson can’t have dairy so I’m quite aware of the need for alternative products, and I’m not alone in this,” Anita explains. “Each week we seem to get more and more requests for ‘free from’ products and particularly gluten free. Shoppers are asking for it on medical grounds but also, increasingly, as part of new lifestyle choices and as a community store it was vital that we responded to that,” she adds.

Anita’s own handmade range of greetings cards also continues to grow, especially around key seasonal events such as Christmas, Valentine’s Day and Easter. In fact she’s now getting regular commissions for personalised birthday and congratulations cards, an extra creative job that she relishes.

The store is also investing in its services, as well as product categories. It introduced a new loyalty card for shoppers in November. Customers get a stamp each time they spend over £10 and after 10 stamps they get £5 off their shop. Almost 1,000 people have already signed up to the scheme and Anita and Raju say it’s helping to boost sales as shoppers try to hit the £10 mark by buying more than they came in for.

“I just designed the card myself and then went to Vistaprint to print it,” says Anita. “It doesn’t have to be a huge complex, epos-linked, scheme if you don’t want it to be. It also provides a good talking point with shoppers at the till and locals clearly love it,” she adds. “We also carry out home deliveries to many of our elderly or infirm shoppers and always ensure that we stamp their cards while we are there so that they can benefit from the rewards too.”

With all these developments, plus regular Premier-branded leaflet drops to local addresses, and a genuine focus on community events and welfare, it’s little wonder that store turnover is growing, and average basket spend is now topping £10. In fact, while most customers shop little and often, £40 and £50 baskets are not uncommon.

And all this, despite a battalion of local competition, including a Martin’s newsagent immediately next door, and a Tesco, Sainsbury’s and Co-op all less than a mile away.

However, while all of these points are well worth celebrating, it was Eldred Drive’s exceptional focus on responsible retailing that really caught the CRA judges’ attention. Located at the heart of a residential estate and close to two large schools, Anita and Raju take an exceptionally hard line on underage sales prevention.

In addition to a prominently signposted Challenge 25 policy and regular staff training, including biannual refresher courses, Anita and Raju also have their own policy of re-checking the ID of all of their “young looking” customers every six months, an event which they say helps to re-enforce the fact that Eldred Drive is a “no nonsense” shop in young people’s minds. Staff training is all logged to demonstrate due diligence.

The store’s refusals register is also religiously updated, and in fact, a quick look on the morning of the CRA judging visit, revealed that a sale had been refused to a young person without ID just a few hours before.

The store actively uses its exterior CCTV to identify proxy purchasers and Raju and Anita take immediate action, going outside to warn off teenagers as soon as they spot attempts. They also make a big point of talking to their adult customers about the illegality and risks of proxy purchasing to themselves, the store, and wider society.

The team also has a good relationship with local Trading Standards and the police, who often come to the store in order to review its CCTV, which covers the whole shopping parade.

And of course refusing sales isn’t just something limited to children, the store will also refuse sales to intoxicated adults and has worked with local residents to not serve alcohol to alcoholic family members.

Earlier in 2015 it also worked with the local police to try and catch a local man who had been attempting to sell illicit tobacco to people in the shopping parade. Anita’s suspicions were raised when he entered the shop and asked to view her tobacco products price list before leaving without buying anything. When she checked the CCTV she could seem him outside trying to sell cigarettes for cheaper to local school children and passers by. She reported him and gave the evidence to the police. Unfortunately he fled the scene and wasn’t caught, but Anita says: “if we stopped just one person buying illicit tobacco, it was worth it anyway.”

The store’s responsible retailing credentials also extend to the local school, and two years ago, it worked with the head teacher to enforce a new rule of not serving any pupils after 8.30am. This was designed to ensure that children arrived for their lessons on time, and the school claims that attendance has improved dramatically as a result.

Anita also routinely carries out litter picks outside the store and in the parade of shops in an attempt to keep the whole parade looking clean and tidy.

But it’s not all about rules and restrictions, thanks to its long trading history, close community ties, and the entrepreneurial spirit of its team, Eldred Drive also strives to be a fun and engaging place to shop. In particular, it works hard to engage the younger generation with amusing events and charitable initiatives which in turn promote a feeling of goodwill between staff and teenagers. Many of these centre around seasonal events such as Easter, Halloween and Christmas when Anita really lets her creative flair loose with in-store games, competitions and giveaways. At Halloween, for example, Anita worked hard to turn the store into a “little shop of horrors” with a life-size monster, a bubbling witch’s cauldron and even fake severed hands hidden in the freezer! Free sweets and treats were also handed out to local children. Hundreds of people, young and old, came to join in the fun which also led to a sales spike.

“Responsible retailing isn’t all about saying no to children, it’s also about engaging with the younger generations who, after-all, will become your future customers one day,” Anita says.

With an attitude like that, we’re sure Eldred Drive will continue to be a firm favourite with local people for generations to come.

The 2015 Responsible Retailing Award was presented to Raju and Anita by the Association of Convenience Stores. Chief executive James Lowman said:

“Anita and Raju’s work to prevent underage sales in their community alone is highly commendable, but their commitment to responsible retailing extends even further than that. The pair have worked hard to foster a strong relationship with the local school and its teachers, as well as local police. Their rule of not serving any school children after 8.30 in the morning is helping to improve school attendance, while their vigilance helps to deter proxy purchasing and illicit tobacco sales from happening outside of the store.”

Raju was given the Lifetime Achievement Awards at the glittering Convenience Retail Awards in March. Having sserved the local community week in and week out for over three decades, Raju has certainly made an impact on the lives of everyone in Eldred. Regular charity donations and fundraisers for schools, charities and good causes in the area have meant that Premier Eldred Drive is truly at the heart of the local community.

Raju was nominated by Anita, who described him as “an amazing, special person who always puts others before himself”. 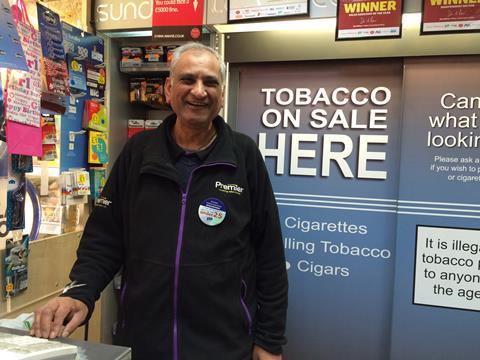