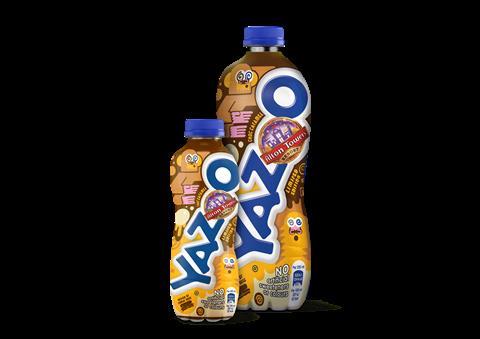 Yazoo is relaunching its limited-edition Choc Caramel flavour due to consumer demand.

The variant will be available in standard and price-marked packs of 400ml (RRP: 400ml £1.15, 400ml PMP 2 for £2) in convenience and wholesale from early February and in grocery channels from late March, along with a one-litre format (RRP: £1.79).

The latest limited-edition release follows Yazoo’s Jaffalicious Choc Orange, which it will replace. The new flavour will be supported by a six-figure fully integrated marketing campaign which includes Video on Demand (VOD), print and digital advertising, social media support, competitions, and in-store activations.

As part of the Choc Caramel relaunch, Yazoo has launched a ‘find a designer’ social media campaign, a nationwide, consumer-led competition to find the UK’s best up-and-coming artist. Artist and illustrator, Tomas Dogg was chosen as the winner and was tasked with co-creating the limited-edition artwork, with input from Yazoo fans.

Brand manager at Yazoo Maren Fuhrich said: “We’re into our fifth year of limited-edition launches, and we’re excited to bring back Choc Caramel by popular demand! Our consumer-led competition has been a great way to reinject some fun, positivity, and engagement amongst our audience, especially after a challenging time for many.

“Choc Caramel was a huge hit with YAZOO fans when we first launched in 2019 and added £1.67m (IRI EPOS Data 52w/e 04.01.20) in sales value to the category between 2019 – 2020. As the market leader, we know that when we introduce innovation, we support the whole category, and we’re sure that Choc Caramel will be another hit with shoppers.”