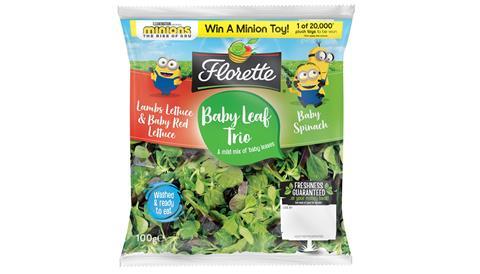 Florette has announced a major on-pack partnership with the world’s biggest animated franchise, ahead of this summer’s release of Illumination’s film ‘Minions: The Rise of Gru’.

Teaming up with Universal Brand Development, the on-pack promotion will see Minions featured on over 13 million packs of Florette Mixed, Classic Crispy, Baby Leaf Trio and Sweet & Crunchy, providing standout with branded shelf ready packaging and in-store activation. Shoppers will be in with a chance of collecting one of 20,000 Minions plush toys.

Nick White, head of marketing at Florette, says: “Minions have become a global phenomenon, so it is a privilege to have these mischievous, iconic characters embellish our packs. It’s a really exciting partnership which presents a great opportunity to connect consumers with the Florette brand whilst bringing some fun and energy to the fresh produce category.”

The limited edition co-branded pack designs will roll out from 16th May in readiness for the cinema launch on 1st July, with the film heavily supported across all media platforms throughout the summer.

The Minions collaboration will be supported by a heavyweight social and PR campaign, giving consumers the chance to win a family trip to Universal Studios in Orlando.

The partnership kicks off a £1m investment in the Florette brand this year that will include ATL, shopper marketing, PR, social media and recipes to inspire shoppers.