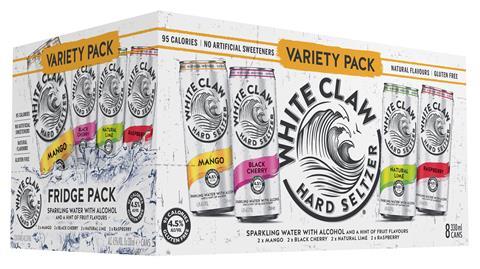 White Claw Hard Seltzer has announced the launch of its variety pack in the UK. Consisting of eight single cans in one shareable box, the nation’s No.1, No.2, No.3 and No. 4 fastest selling Hard seltzers single cans* are now available to buy nationwide.

The pack of eight includes Raspberry, Natural Lime, Black Cherry and Mango - White Claw’s latest addition to its UK offering. The pack which has an rrp of £15 will be available to independent retailers later this year.

Michael Dean, UK head of marketing at White Claw, said: “This summer is set to be full of socialising and catching up with friends and family. What better way to celebrate the summer than being able to share all White Claw Hard Seltzer’s UK flavours in one box! Whether it’s a picnic in the park, a BBQ in the garden or heading to a festival, our Variety Packs have a flavour for everyone.”