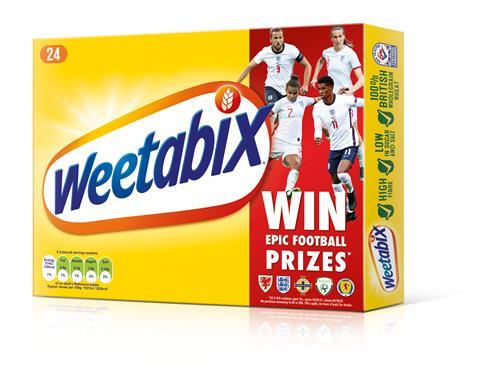 The promotion is part its long-term partnership with the home nations’ respective football associations and support of grassroots football.

Running from May until October across its portfolio, including Weetabix Original, Oatibix, Weetabix Protein, Crispy Minis and Weetabix On The Go, prizes also include the ‘ultimate PE training session’ with FA coaches for one winner per nation and friends, signed shirts and tickets to international matches.

The promotion is timed for the summer of football and the partnership aims to encourage kids to get active and help the nation to embrace healthy choices. Weetabix will work with field sales specialists REL to create depot displays at wholesalers and provide POS to convenience retailers.

Head of brand at Weetabix Gareth Turner said: “We’re thrilled to bring this partnership to life, offering unique prizes and access to some of the biggest British football players across the men’s and women’s game. We’ve heavily invested in the cereal category in the past 12 months, with £14million spent on marketing, and this promotion will further reinforce Weetabix as part of the fabric of British society.

“Landing ahead of a big summer of football, it will be a great opportunity for retailers to maximise this hook, help the nation to get active and to make the cereal shelves stand-out in 2021.”