SodaStream is working with national water scheme Refill as the companies look to make the most of National Refill Day (NRD) on Wednesday 19 June. 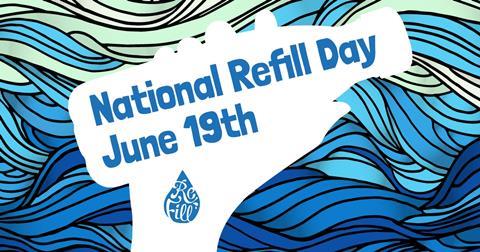 The Refill scheme was first set-up to prevent plastic pollution at source by making it easier to reuse and refill water bottles on-the-go, instead of buying single-use plastic.

The scheme works via a location-based app and connects people who are looking for water with local businesses, transport hubs and public spaces where they can refill for free. High profile c-store retailer Dean Holborn is among those who offer the service in their stores.

As part of the Refill collaboration, SodaStream will offer a discount on special-edition water machines for NRD next month. The organisation will also be hosting special events in Bristol during the campaign.

Michael Laws, marketing manager at SodaStream UK, said: “We’re incredibly excited to partner with such a dynamic and progressive campaign such as National Refill Day. SodaStream are committed to tackling the issue of plastic waste and its impact on our environment. The Refill campaign provides the ideal opportunity to encourage the public to change habits around reusing bottles and drinking tap water. I look forward to this relationship developing over the coming months.”

Natalie Fee, founder of Refill owner City to Sea, added: “I’ve always really admired SodaStream’s bold and playful response to plastic pollution from bottled water, so I’m thrilled we’re able to work more closely and amplify our mutual goals of stopping plastic pollution at source. In the UK alone, we consume 13 billion plastic bottles a year – and despite having some of the best quality drinking water in the world, 7.7 billion of them are plastic water bottles. Nearly half of those bottles are not recycled, with more than 15 million littered, landfilled or incinerated every day. The Refill campaign now has more than 19,000 Refill Stations in the UK alone - including railway stations, airports and high street chains such as Costa, Starbucks and Wetherspoons all offering free drinking water. We’re looking to expand the campaign later this year and partnerships like this really help our mission.”

The Refill initiative has grown rapidly since launching in Bristol four years ago – there are now more than 160 local Refill schemes running across the UK and the company is set to launch internationally from this year.