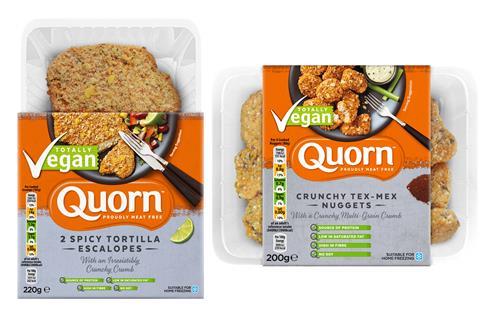 Alex Glen, UK marketing director at Quorn Foods, said: “As more than half of all UK consumers (52%) are now reducing their meat consumption (YouGov, December 2018), and awareness about the environmental consequences of people’s dietary choices at its highest ever level, we’re introducing two high on flavour, low on calorie products that are a healthy source of protein, better for the planet and ideal as a midweek snack or centrepiece for a main meal.”

A twist on Quorn’s crispy nuggets, containing 200 calories per portion, the crunchy Tex-Mex nuggets are coated in breadcrumbs made with quinoa, oats, barley and linseed (rrp £3).

Meanwhile, the new spicy tortilla escalopes (rrp £3.25) are high in fibre, low in saturated fat and contain no soy, with less than 250 calories per serving.

The Tex-Mex nuggets are available to convenience stores now, while the spicy escalopes will launch in October. Both products are approved by the Vegan and Vegetarian Society and feature the Totally Vegan Trademark logo on pack.