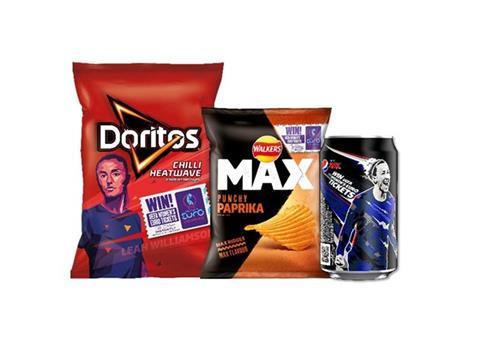 PepsiCo is marking its long-term commitment to women’s football by sponsoring the UEFA Women’s EURO 2022 as part of a five-year partnership with UEFA.

PepsiCo will be encouraging the nation to show the same level of support for the women’s game as with the men’s national team, with the launch of a marketing campaign that runs across digital, social, PR, POS, OOH and in-store activations.

As part of the partnership, Doritos will be launching its biggest campaign of the year and its first-ever brand-led football campaign in the UK. The campaign, fronted by England players Jill Scott and Mason Mount, will span over the duration of the tournament and will include TV, Digital, PR and strong shopper support.

An on-pack promotion is also being rolled out across Doritos, Walkers MAX, and Pepsi MAX, calling on consumers to ‘GET MATCH READY’. Featuring England players Lucy Bronze, Nikita Parris and Leah Williamson, the on-pack promotion is offering fans the chance to win 750 pairs of tickets, including for sold-out matches.

Lucy Bronze will be at the forefront of Pepsi MAX’s integrated media campaign, spanning across digital, Out Of Home, shopper marketing and Point Of Sale. The UEFA Women’s EURO final show at Wembley will also be sponsored by Pepsi MAX, with some of UK’s best female artists coming together to perform.