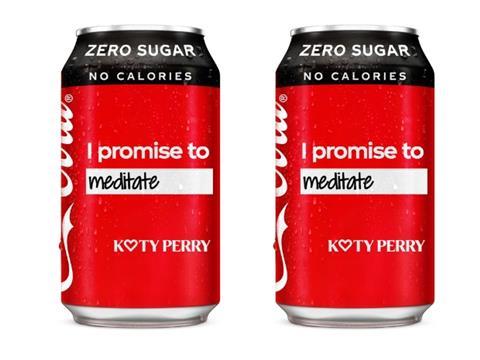 Katy Perry has unveiled her ‘Open To Better’ limited-edition Coca-Cola resolution can with all proceeds to support ONE.

Part of Coca-Cola’s ‘Open To Better’ campaign, pop star Katy Perry’s can, which features her resolution “I Promise to Meditate” will go on sale with 100% of proceeds going to the ONE Campaign.

Katy Perry commented on her limited-edition can, “I’m delighted to be able to support the amazing work ONE does around the world with the proceeds from the sale of my limited-edition Coca-Cola can featuring my personal resolution “I Promise to Meditate. ✨♥️”

Marketing manager at Coca-Cola Great Britain Bryony Lester said: “For more than 136 years, Coca-Cola has used its voice to help unite people across the world. In 2021, our ambition is to be ‘Open To Better’ and use the power of our packaging to share resolutions of hope and positivity that we hope fans will enjoy sharing with their friends and family.”

President and CEO of the ONE Campaign Gayle Smith added: “Encouraging and inspiring young people during these challenging times couldn’t be more important and we are excited to be part of Coca-Cola’s ‘Open To Better’ campaign with Katy Perry. At ONE, we have the privilege of working with young activists all over the world, including across Europe, who use their voices to campaign for a world without extreme poverty. We’re honoured that our work will be supported by the proceeds of this limited edition can.”