Haribo back on TV with updated Kids Voices ad 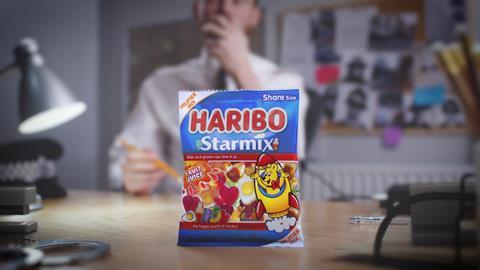 Haribo has returned to the small screen with its popular Police advert. The creative,which first launched in 2020, now features an extra scene placing the spotlight on fruitier, juicier Starmix.

On air for nine weeks, the 30 second advert features two police officers who release their inner child with a story of cops and robbers using the five iconic pieces from the pack. A new scene takes viewers back to the control room for the tastier Starmix announcement.

Each adult character is voiced by children and celebrates the inner child and playful imagination that comes from enjoying Haribo sweets.

Claire James, trade marketing manager of Haribo UK, said: “The popularity and anticipation of our ‘Kids’ Voices’ TV adverts builds each year, which is why we expect the return of this particular instalment to be just as likely to capture the childlike happiness from our fans as it did when it originally aired.

“After the past twelve months, we are certainly excited about bringing some joy and light-hearted fun back to their TV screens.”