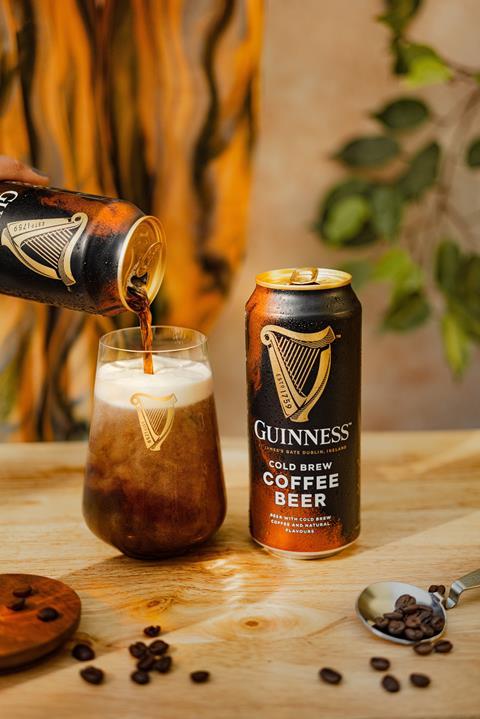 Guinness Cold Brew Coffee Beer (4% ABV) is the latest addition to the leading stout’s portfolio. The drink comes in a 440ml can format (rrp £5.50) and is initially launching in Tesco stores from 19th April, with a wider roll out across the off-trade including wholesalers and convenience throughout April, May and June.

With flavoured alcoholic drinks continuing to grow in popularity (Nielsen Scantrack latest 52 & 26 weeks ending 6.11.21), and 95 million cups of coffee being consumed each day in GB (The British Coffee Association), Guinness has high hopes for the new launch, which aims to attract existing and new customers. The firm claims that the product’s bitter and sweet roast coffee tasting notes create an elevated experience for beer and coffee lovers alike. The drink is made with coffee which has been steeped in cool water for long periods of time instead of brewed with boiling water. This is added to Guinness Draught, alongside additional roasted barley flavours, to balance delicate notes of coffee, chocolate and caramel. The drink contains approximately 2mg of caffeine per can, the same as a decaf coffee.

Guinness Cold Brew Coffee Beer is being supported by marketing spend in its first year which includes social media, influencer and advocacy activity.

The launch of Guinness Cold Brew Coffee Beer follows on from the release of Guinness 0.0, alcohol-free beer, which hit shelves last August.