This summer, Yoplait yogurt brand Frubes has teamed up with Disney UK to launch a new Star Wars Frubes range. 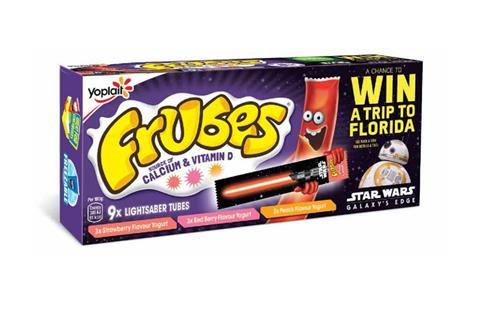 The collaboration includes the rollout of an on-pack competition giving shoppers the chance to win a trip to Orlando, Florida to visit Star Wars: Galaxy’s Edge - the new land at Walt Disney World Resort.

Each tube and Frubes box in the Star Wars range will feature a different coloured lightsaber to appeal to kids and fans of the well-known film franchise.

Landing on shelves at the end of the month ahead of the release of Star Wars: The Rise of Skywalker in December, the limited-edition packs will be available in convenience stores until the end of September.

Rosanne McDonnell, brand manager for Frubes, said: “Frubes are perfect for lunchboxes and after school snacks as we know that children love the tasty fruity flavours, and now they can have even more fun with our Star Wars-inspired tubes. We’re really excited about this collaboration and are confident it will encourage kids to play.”

McDonnell added: “As a brand Frubes is all about ensuring that kids have fun wherever they are, but we also have a job to play in guaranteeing that children get the goodness they need. As category leaders, we need to reassure parents of the benefits of yogurt and educate them on how nutritious Frubes are - that’s why we’re working closely with Change4Life and Disney.”

The Star Wars Frubes will be supported by an updated TV advert and video on demand content. The launch also coincides with the announcement that brand now supports Public Health England’s Change4Life campaign.

The Change4Life Good Choice badge will feature in the new Frubes TV ad and on shopper marketing materials, including barkers and dedicated gondola ends.