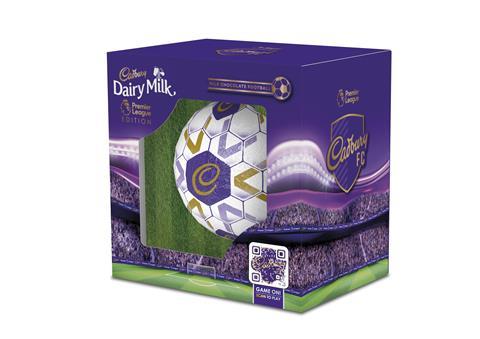 Featuring eye-catching Cadbury FC-branded packaging, the 256g football has an rrp of £6.99 and is a year-round gifting opportunity.

“The partnership between the Premier League and Cadbury Dairy Milk is a recipe for success,” said Kelly Lawrence, Brand Executive for Seasonal Chocolate at Mondelez International. “Only they together could create a unique gifting product like this – it’s sure to bring a huge smile to the faces of football-mad shoppers.

“We know that football is now more than just a sport and has taken on a life of its own. Football was the most searched-for term on Google in the UK last year, and more than 14 million people attended a Premier League game last season. This product really taps into this big and growing consumer audience.”

The football is individually wrapped and comes in its own Premier League branded box featuring an on-pack Premier League digital game which is accessed via scanning the QR code or by visiting superstriker.cadburyfc.com. Consumers will have 15 chances to score a super strike against the goalkeeper and gain a top score.