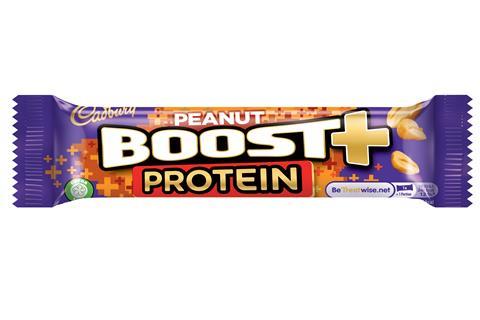 Building on the original singles recipe, Boost+ Protein Peanut features a combination of caramel and protein crisps, wrapped in Cadbury chocolate with peanuts.

The new launch will be supported by an out-of-home, digital and PR campaign. Bespoke in-store POS materials will also be made available to convenience stores.

Claire Low, associate marketing director for countlines at Mondelez, said: “There is a real consumer need for protein bars that deliver on taste, which is why we launched Boost+ Protein last year. Taste is the number one driver of purchase for the chocolate category (The Nielsen Company EPOS Sales MAT w/e 2.12.17). We know that 83% of protein-interested consumers will not sacrifice on taste (Global Shopper Views on Protein 2015). Boost+ Protein Peanut continues to deliver on the enjoyment that consumers expect from the nation’s No. 1 chocolate brand, with the added benefit of protein.

“We have built on the strong base we have with Boost+ Protein original recipe, which was well received in consumer tests against competitors, to launch a tasty peanut offer. Peanut is the second best-selling protein bar flavour after chocolate (Kantar TNS Chocolate Needscope 2017), so a peanut variant is the right extension to our Protein range offering consumers choice of flavours and textures under the Cadbury Boost brand.”