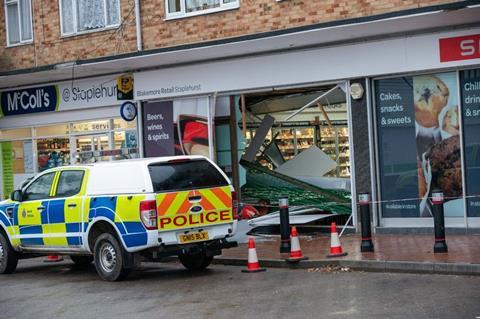 A man has been arrested following an attempted ram-raid robbery at a Spar store in Kent.

The incident happened at the convenience store on The Parade in the village of Staplehurst at around 1am on 12 March.

According to Kent Police, a vehicle caused damage to the front of the store in an attempted burglary, but nothing was stolen from the premises. A Land Rover Discovery reported stolen from Tunbridge Wells was subsequently found on fire nearby on Jaggard Way.

A search involving a police dog was undertaken and after spotting a suspicious vehicle, police attended Marden Road and arrested a 30-year-old man from East Sussex on suspicion of burglary and drink driving. He remains in police custody.

The incident followed a number of recent ram raids across the UK.

Detectives are asking anyone who has information or who has CCTV or dashcam footage that may assist their investigation to call the appeal line on 01622 604100 quoting reference 46/46578/19. Alternatively, you contact the independent charity Crimestoppers in Kent anonymously on 0800 555111.