Sales of cigarettes in the US have nosedived as smokers continue to switch to vaping in their droves, new data has revealed. 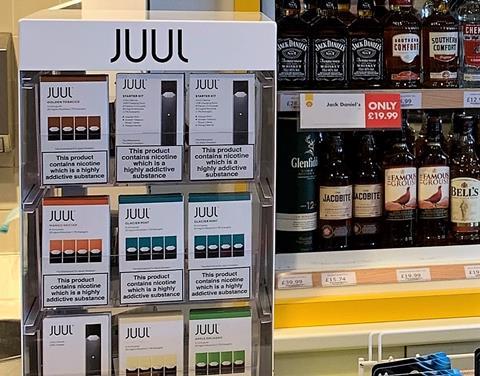 Sales fell by 8.8% year on year in the four weeks to March 23, according to the latest US syndicated market data from Nielsen, which tracks cigarette sales.

Commenting on the fall, public health advocate and vaping author David Sweanor said: “There is a pronounced acceleration in the decline of cigarette sales over the past year, and the increase in e-cig sales is a mirror image of the decline in cigarette sales.”

Dan Thomson, managing director of vaping brand Juul Labs UK, said it hoped to help drive a similar change in the UK, now that the Juul brand was being increasingly widely stocked by convenience retailers and Sainsbury’s and Boots.

“We’re really encouraged by the new data which shows a massive 8.8% decline in US cigarette sales from a year ago,” he said. “They have previously declined by only 2%-3% on average every year.”

In the US total Juul pod volume increased by 424 million pods over the past 12 months as compared to the previous 12 months, while the decline in cigarette pack volume exceeded 597 million cigarette packs over the same time frame.

In markets where Juul products have high market penetration, cigarette volume declines are even more pronounced.

However, news of the US cigarette sales slump also came in the same week that US Food and Drug Administration (FDA) commissioner Scott Gottlieb issued a press announcement on a “potential safety issue” relating to vaping products and seizures.

According to the FDA, over the last nine years, 35 seizures have been reported to the FDA’s Adverse Event Reporting System by the doctors of individuals who reported that they vaped at some point prior to suffering a seizure or convulsion.