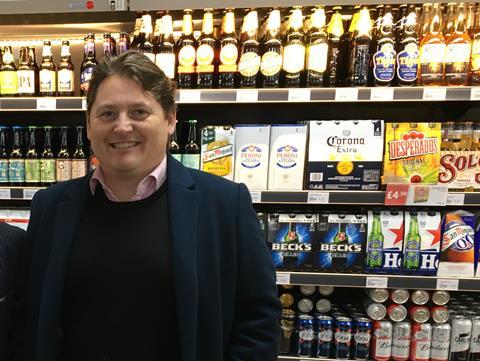 Under the new legislation, all licensed premises, including convenience stores, must comply with the Public Health (Minimum Price for Alcohol) (Wales) Act 2018, meaning retailers must not sell alcohol below 50p per unit.

Similar legislation was introduced in Scotland in May 2018.

“At this point there is a possible margin opportunity as cost prices remain constant while retail price of some goods climbs in line with competitors’,” he added. “We are however cautious of competitors using any margin benefits to fund reductions in other areas such as chilled or fresh meat.

“We feel there will be a move to smaller pack sizes and possibly a move to have more chilled space to cater for this.”

He said the group was delisting white cider, which would see significant price rises under MUP, and would be “closely monitoring some ales with a high ABV” to see if there was demand for them at the higher price.

“Regarding spirits we are delisting a number of own labels as the gap between branded and own label closes, making own label less attractive,” Matthew added.

Tony Cristofaro, owner of Spar Landmark Place, Cardiff, said: “I don’t envisage any issues as I believe MUP has been adequately advertised in the local press and I am hoping for a small sales increase as now our own-brand spirits will be the same price as Tesco and Sainsbury’s around the corner.

“I have delisted all the large bottles of cider (Frosty Jacks and own brand). I had already delisted the strong cans and bottles many years ago due to theft. I decided to delist the big bottles because I envisage them being stolen more often when they’re over £10 a bottle!

“There’s only a handful of own-brand items which are affected by MUP and we’ve already received advice from Blakemore, plus price changes have been downloaded to stores in preparation. They have also supplied new POS for the affected items.”

North Wales Spar retailer Conrad Davies added: “Hopefully, we’ll do all right out of it. We will have the opportunity to say we are the cheapest in Wales for a lot of lines.

“We had a few products to sell through at the end, like pricemarked vodka, Lambrini and four-packs of Spar cider, and needed to get rid of the 2ltr strong cider which will leap up in price. In the future I’ll probably just stick to Strongbow in the 2ltr pack.”

There are currently no plans in England to introduce Minimum Unit Pricing. Many independents in Scotland have reported an increase in alcohol sales due to the level-playing field effect, but the overall volume of alcohol sold per adult has declined.