Independent ethical retailer Hisbe has been “blown away” by the support of its local customers after it was reprimanded by the authorities for unwittingly breaking the law and selling extra virgin olive oil on tap. 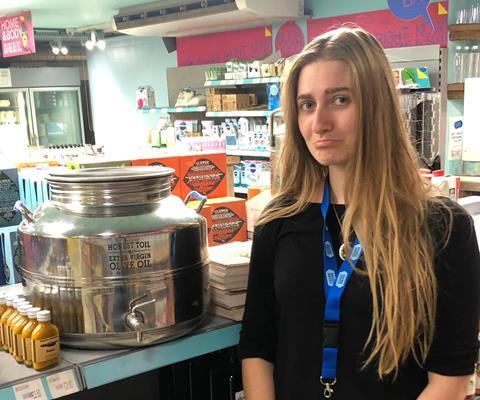 The sustainable Brighton-based store, which encourages customers to reduce wastage and packaging by purchasing a wide quantity of foods in refillable containers, had been selling responsibly-sourced extra virgin olive oil from a large metal container with a tap.

However, the store was not aware of EU legislation implemented in 2012 that means olive oil must only be sold in a ‘sealed’ bottle or container that can’t be ‘re-sealed’ after the first time it is opened.

The legislation also states that extra virgin, virgin and olive oil composed of refined olive oils and virgin olive oils should never be sold “on tap” in their pure form.

Following a tip-off to the authorities and inspection by an officer from the Rural Payments Agency, Hisbe was told to cease selling the olive oil on tap with immediate effect.

A Facebook post, in which the store apologised to its “many disappointed customers” who would no longer be able to buy olive oil refills, created a social media storm, Hisbe operations director Jack Simmonds told C-Store.

“We were so disappointed when the inspector broke the news, as were our customers, as we are a truly ethical, sustainable retailer trying to make a positive difference to people and our planet and this just felt like a sledgehammer to crack a nut.

“As a result the issue has really ignited people on social media, with a great many customers sympathising and suggesting a wide range of things we could do about it,” he said.

“As we now know, the rules on refills don’t apply to other types of oils such as rape-seed and sunflower oil, so lots of our customers suggested that we simply introduce these instead. So in direct response to customer demand that’s what were going to do. This action, which seemed so negative at first, will actually lead us to grow our oil refill offer and we are now actively hunting high quality, ethical producers of rapeseed and sunflower oil.

“If we end up expanding our range, it would be a nice little snub to the person who reported us in the first place and a great way to turn a negative situation into a really positive one for our customers and suppliers,” he added.

The store is also investigating the possibility of re-instating its olive oil on tap offer by “infusing” the main storage vessel with a small quantity of flavour or rapeseed oil, as the law banning the sale of olive oil on tap does not apply to infused olive oils, as long as these meet the correct labelling requirements.

“We’re certainly not about to give up on refilling when it’s the right thing to do for a sustainable food future,” Jack added.

An olive oil producer, Mesto Olive Oil, commented on Hisbe’s Facebook post: “Lots of us small producers tried to fight it when the clarification of the legislation was announced. There is an inescapable truth that olive oil is expensive to produce and therefore prone to significant fraud in the blending with cheap veg oils.

”The clarification and enforcement stated that olive oil could only be sold to the end consumer in a container with a tamper proof seal as a way to guarantee the oil is what is says on the label. Laudable idea but not necessarily hitting the target given most fraud happens in the factories of mass produced olive oil prior to bottling and sealing!”