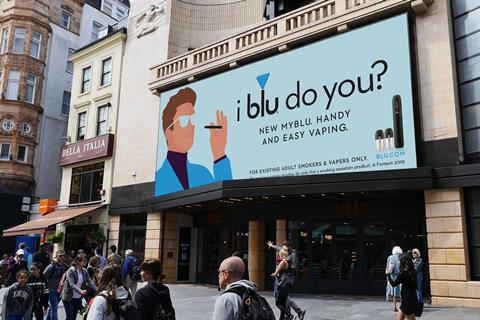 Anti-addiction organisation Allen Carr Easyway International and 12 members of the public complained about three of Blu’s outdoor posters, challenging whether they encouraged non-smokers and non-nicotine users to use e-cigs.

The first ad, seen on a bus, featured a stylised drawn character of a woman wearing sunglasses and holding an e-cig. The ad featured the headline claim “I blu do you?” alongside the claim “new Myblu, handy and easy vaping.”

The second ad, also seen on a bus, featured a stylised drawn character of a woman and a man wearing sunglasses and with each holding an e-cig. “new Myblu, handy and easy vaping.”

The third poster featured a stylised drawn character of a woman wearing sunglasses holding an e-cig, and featured the headline claim “I’m new to blu.”

Smaller text underneath also stated: “This product contains nicotine 18+ only. Not a smoking cessation product.”

The Advertising Standards Agency (ASA) ruled that the adverts did not breach UK advertising regulations.

The CAP Code states that e-cig ads do not encourage non-smokers or non-nicotine users to use e-cigs.

Blu manufacturer Imperial Tobacco said the claim “For existing adult smokers & vapers only” clarified that the ads were only directed at existing smokers and vapers.

It also said that it believed that the targeting statement was displayed prominently on the ads and specifically used a dark text colour in contrast to the light blue background so it could be read clearly.

The ASA said: “The ASA noted that all the ads contained the wording, ‘For existing adult smokers & vapers only’.

“We noted that all the ads featured stylised drawn characters who were all shown vaping and we considered that there was nothing in how they were presented that was likely to suggest to non-smokers particularly that the product was for them.

“We concluded that the ads did not encourage non-smokers and non-nicotine users to use e-cigarettes,” it added.

Article 20(5) of the Tobacco Products Directive 2014/40/EU introduced a raft of new restrictions for e-cig advertising.

Adverts for electronic cigarettes are permitted outdoors on posters, such as those on buses, bus stops and billboards.

They are also permitted in the trade press, posters in shops, and in blogs, tweets and independently-compiled, non-paid for reviews.