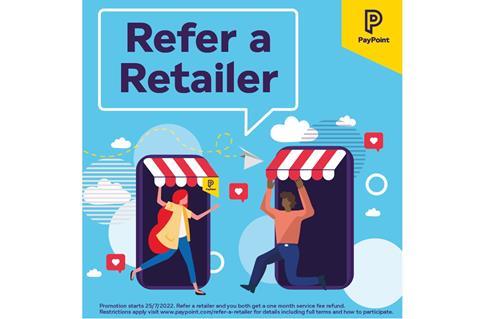 PayPoint has unveiled a ‘Refer a Retailer’ scheme to reward PayPoint One retailers and encourage new retailers to sign up to the company’s PayPoint One offering.

The promotion, which began on Monday 25 July, offers existing PayPoint One retailers one free month’s service credited to their account for each successful referral they make. In addition, referees will be eligible to claim back their first month’s service fee.

The news follows the launch of a number of opportunities in recent months such as the introduction of PayPoint’s Next Business Day Settlement which will enable retailers to receive the money from card transactions into their nominated bank account the following business day, instead of within three to five days.

Ben Ford, retail services director at PayPoint said: “The launch of this promotion will further reward and show our appreciation for our 28,000 existing retail partners as well as open exciting opportunities for new retailers.”