The Premier store at Dundee University, headed up by former army chef and retail services manager Moira Dean, has been taken to the next level after a major refit. 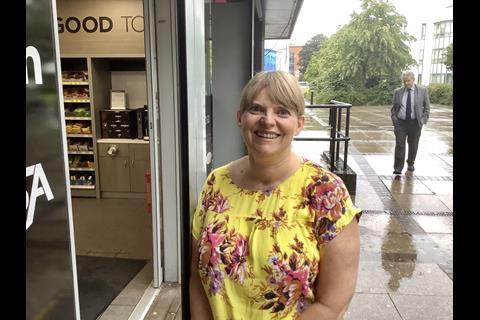 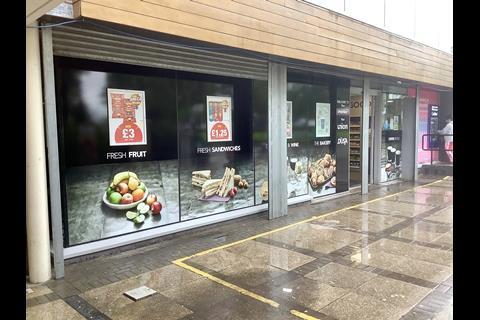 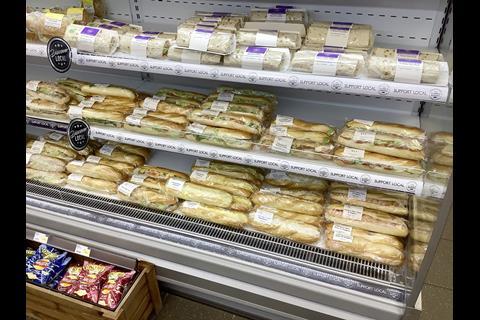 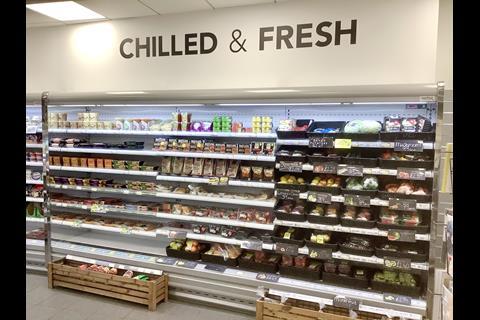 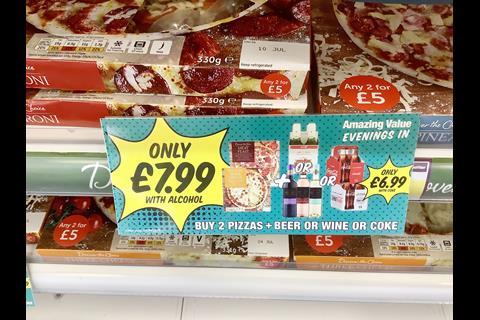 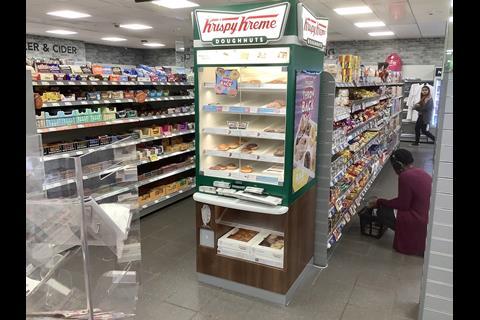 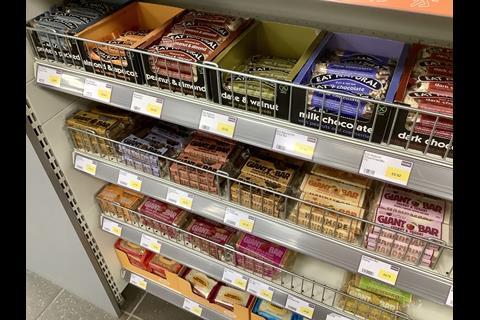 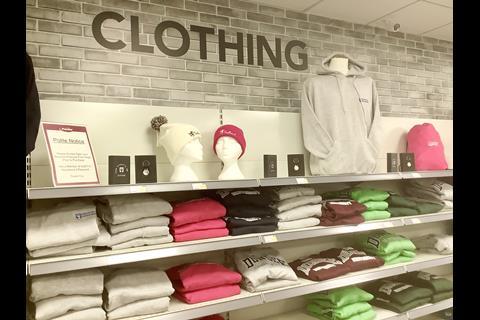 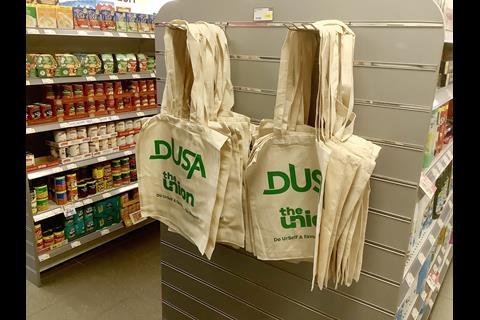 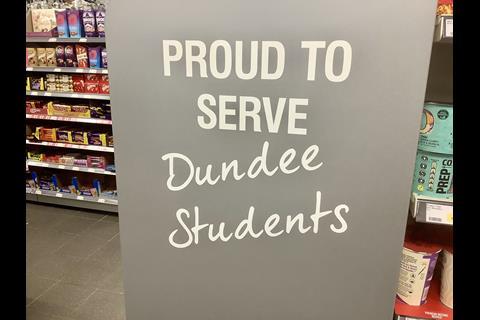 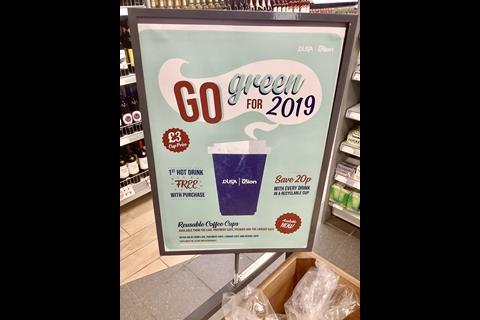 It may have been raining during C-Store’s visit to Dundee University, but nothing could dampen the spirits of retail services manager Moira Dean and her team at the on-campus Premier store.

Following a complete refit last summer, sales in almost every category have grown year on year and Moira has been making the most of all the in-store changes, which include an expanded chilled offer, new fixtures and complete interior redesign.

The six-figure investment in the store – negotiated in partnership with Booker, the DUSA student union and the university – was 10 years in the making and crucial to the store’s future as a destination for students, staff and tradespeople working and studying in the local area.

“The lights, flooring, ceiling, shelving and till area are all new and we introduced a ‘good to go’ area at the front of the store as well as a Krispy Kreme bakery unit. These things make the store even more appealing to students,” she says.

The only concern Moira had when the refit was in the planning was the need to cut the number of checkouts from five to four to make room for more products around the tillpoint. Thankfully the change hasn’t had a negative effect on sales or queue times.

“We are busy from the moment the store opens and queues can sometimes stretch all the way back to our food-to-go range,” Moira says. “We were really worried that having one less till would cause delays, but the team have a good system to get people through quickly and call for assistance if needed.”

Moira trusts her team to pull together and takes pride in employing students to work part time in the store alongside her full-time workers.

“We get quite a few students working in store, particularly those who have to pay for tuition as well as their living costs. I like to take them under my wing and they are nearly always a lovely bunch who stay with us until they graduate,” she adds.

Running a busy convenience store and managing all the vending machines and food outlets on the university campus is no easy task, but Moira has done her homework and built up a strong relationship with her symbol group and suppliers, which she claims are key to the store’s success.

She explains: “We work with Clarks Bakery for our sandwiches and the likes of Epicurium and Tree of Life to boost our range of free-from snacks and source vegetarian and vegan lines. Our meat is all halal, too, because there is a large diverse international community that come here to study.”

University-branded clothing and stationery is also sold in store, and although the range has been cut down since last year’s refit, the products are still popular. Moira has introduced a few different colours for the new term to keep the range fashionable.

She adds: “The girls working in the store are really good at trying new things and we have built up a great system where the suppliers come to us with ideas and we give everything a go. If it doesn’t sell then we clear it out and get something new in instead.”

Students are open to trying new things, says Moira, which is partly why the university’s Yoyo Wallet payment app has been so successful.

“The app is something that Caffe Nero and a few universities down south use,” she explains. “It works really well because the students can pay for things really quickly using their phone and get 100 points for every £1 spent.

“They can then redeem their points on food and drink sold around the uni. It also helps people keep track of their money, because there is a section where you can see exactly what you have bought on each day.”

The Yoyo app is used by 40% of Moira’s customers and helps her cut down on bank charges and the time needed to cash up at the end of the day.

“I think quite a few c-stores could make use of the Yoyo app,” she says, “especially if they are in an area with lots of younger people. It is one of those things that helps us stand out from the nearby Tesco.”

The store differs from the competition in other ways, too. Unlike most convenience outlets, all profits are reinvested into the university and help to fund student projects.

Moira explains: “We don’t mind breaking even on some things, like our reusable cups and bags, because it is all going back to the consumer. The students care about sustainability and we want to encourage more  of them to use less plastic with our branded reusable products.

“That is why we have a water fountain outside the store for people to use for refills,” she adds. “When the idea was first suggested, there were some concerns that our bottled water sales would be affected, but it is worth it for us to be seen as thinking about the environment. Even if our water sales start to drop off then that is prime selling space that we can use for something else.”

The store stocks a good range of niche healthier lines such as Barebells protein bars, Eat Real chips and Itsu lunch pots, and Moira has embraced the Scottish government Healthy Living programme to encourage the sale of fruit and veg through c-stores .

She explains: “The government’s Healthy Living programme is a really good thing, but it was a lot of work at first for us to fine tune our range and promote the right products.

“It is even more important for us to get it right because we are doing business at a place where people are learning and studying,” she says.

This health focus has certainly helped Moira achieve impressive sales results. She sometimes takes £14,000 in one day during term time, but Moira also believes the store’s improved chilled offer is key to its success. “Londis started supplying us with fresh and chilled after we brought in their Discover the Choice range and meal deal promotions during the refit,” Moira explains. “Our chilled sales have gone up by an extra £2,500 per week since then.

“We recently worked with the team at Premier and Booker to create leaflets with recipes for people to have while they are staying at the campus,” Moira adds. “We start with the basics like cheese on toast and then work up to a full meal.”

“The good thing is that all the products included in the recipe leaflet are available in store so they don’t have to go elsewhere to stock up.”

And this strategy appears to have made the grade. In the months since last year’s refit turnover has risen from an average of £40,000 a week to nearly £55,000. Of course, footfall changes quite a bit when the students go off on holiday. Sales drop to about £20,000 during the quiet periods and the store even closes for a short time over the festive season before the students return for a new year in January. But any fall-off in trade is certainly made up for during term time.

“We work very closely with the all parts of the uni now and are open to suggestions as to what we can do to help the students and the university as a whole,” she says.

“For the first time this year, we opened the store for a few hours on graduation day. There was a fantastic atmosphere in the store and across the campus.”

Moira adds: “We sold quite a bit of party food and drink, but we spent a significant part of the day helping some of the girls with their dresses and fixing their broken heels. We even got to join in with the party after the store closed, which really was very special.”

Moira’s contribution hasn’t gone unnoticed as she was even recognised at Dundee University’s end of year awards for her work with the students.

“I was really shocked when I won because the ceremony is usually just for students,” Moira says. “I just want to keep things going from now on and collaborate even more with the university, because that is when we work at our best.”