Yogiyo, maker of Korean stir fry sauces, is expanding its range with the launch of nine new products including meal kits, noodle pots, hot sauces and a Korean BBQ sauce. 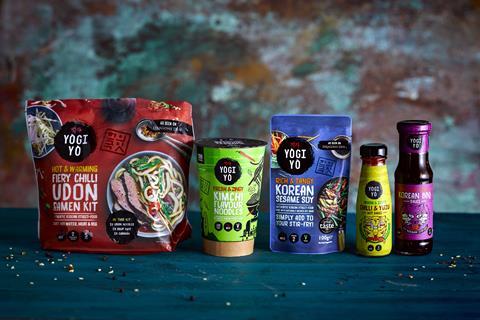 The firm is aiming to capitalise on the continued growth in the world foods category and the fact that 16% of consumers have eaten Korean food at home in the past three months (Mintel World Food Foods Report, 2018)

Yogiyo’s new meal kits provide two servings and include a mix of soft noodles, a sauce pouch and garnish. Meanwhile its new noodle pots are all low-fat, under 300 calories and are the first in the UK to be packaged in a compostable pot.

Both of the brand’s hot sauces also use a key ingredient in Korean cooking: ‘gochujang’ (fermented chilli paste). One is combined with yuzu and the other with wasabi to create two distinct sauces that sit alongside its existing range of stir-fry sachets.

Finally, Yogiyo’s new BBQ sauce is created using an authentic Korean recipe and can be used for dipping, marinating, glazing or coating / cooking.

Sue Youn, co-founder of Yogiyo, said: “As we know from our own experience, Korean food started to take off here thanks to the explosion in street food. Since then, it’s been steadily increasing in popularity - whether its specialist restaurants opening, celebrity chefs embracing it, or big chain restaurants adding Korean-inspired dishes to their menus. But, with an extra nine products across key retail categories, we’re now well set and ready to lead Korean cuisine’s charge into the mainstream.”

As part of the brand’s expansion and revamp, Yogiyo has also appointed Euro Food Brands (EFB) as its UK distributor. EFB works with some of the world’s most well-known food and drink brands, including Illy, V8, Hershey’s and Barilla.