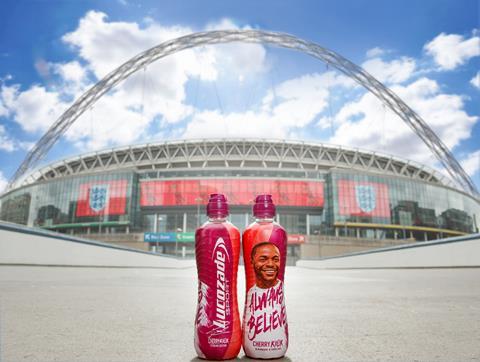 Lucozade Sport is teaming up with England footballer Raheem Sterling as part of a marketing campaign for new Lucozade Sport Cherry Kick. The marketing activity will span three months, kicking off in September and featuring in the run-up to Christmas.

The Cherry kick challenge is a twist on the popular social media bottle challenges, where consumers will be asked to create their own Instagram Reels video, using a bottle of Lucozade Sport to show off their football &/or sporting skills. By sharing their creations with the #CherryKickChallenge and tagging @LucozadeSportUK they will be in with a chance to win prizes.

Lucozade Sport Cherry Kick is available now in 500ml standard and PMP bottles as well as a four-pack multipack.

Lucozade Sport is supporting both Cherry Kick and Anthony Joshua Fruit Punch through an out of home, PR, partnerships and paid social media marketing plan that will raise awareness of the drinks.

Head of marketing for Lucozade Sport Tom Bell said: “Lucozade Sport Cherry Kick is an incredibly exciting launch for the brand and we’re confident it will add growth to the Sport range. We know that each flavour in our range has a unique shopper profile with only a small amount of crossover, so we’re confident that Cherry Kick is already bringing in incremental sales for retailers.

“This new campaign is set to highlight the importance of staying hydrated while exercising all year round – and who better to help us do that than our impressive squad of sports personalities? Signing one of England’s most recognisable footballers in Raheem Sterling to the Lucozade Sport squad is huge for the brand and will drive real stand-out for Lucozade Sport Cherry Kick on shelf.”

“We know from the tremendous success of Lucozade Sport Fruit Punch, which we launched last year with Anthony Joshua, that having iconic sportspeople on pack really puts the brand front of mind with shoppers.”