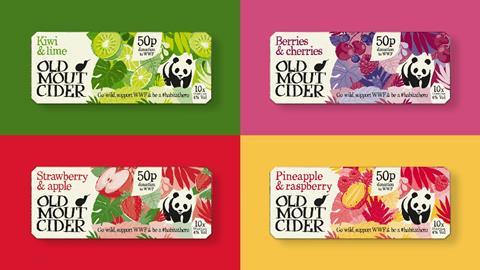 Old Mout has launched its biggest ever campaign, along with limited edition designs for its range of 10 packs.

Running until 31 July, across TV and social channels and with every limited edition pack sold, Old Mout will be donating 50p to WWF to protect the Amazon and support their wider conservation work.

Rachel Holms Heineken UK, cider marketing director said: “As the cider category leaders, Heineken UK is constantly looking for ways to create a positive future. Since 2019, Old Mout and WWF have been educating the world on the importance of reducing human impact on the environment. Habitat loss is one of the leading threats to animals across the globe. In fact, the planet loses an area of forest the size of a football pitch every two seconds. If we fail to act on climate change, one in six species could go extinct. The launch of our limited-edition WWF packs, will not only raise awareness of our invaluable partnership, but allow consumers to learn more about the work of WWF.”