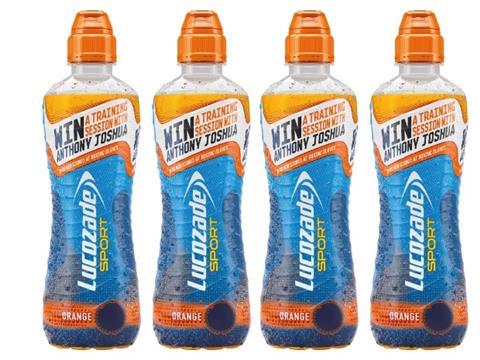 Lucozade Sport is delivering a knockout offer for one lucky winner and two guests to meet the sporting hero and enjoy a training session in the ring. There are also 20 runner-up prizes of a pair of boxing gloves, signed by Anthony Joshua.

The promotion will appear on more than five million 500ml bottles of orange, raspberry and fruit punch variants. Consumers can enter by purchasing a promotional bottle and submitting the code on the Lucozade Sport website. Promotional bottles will be available between November and January, timed to be in-store to coincide with Joshua’s next heavyweight title fight, currently scheduled for December.

“The partnership between Anthony Joshua and Lucozade Sport has proved irresistible to shoppers over the past couple of years,” said Tom Bell, head ofmarketing for Lucozade Sport. “In the past year, Lucozade Sport fruit punch - featuring Joshua on pack - has driven sales of almost £8m - making it an important pillar of the £112m Lucozade Sport brand [EXT IRI MarketPlace GB, latest 52-week data ending 23.08.20].”

“The insight behind on-pack prize offers shows consumers who perceive they have a good chance of winning are more likely to enter, hence the additional 20 pairs of signed gloves driving entries and purchase”.

Last year’s partnership with the England Lionesses women’s football team and their feature on Lucozade Sport bottles helped drive increased in-store visibility for the brand and resulted in a sales uplift of 37% (IRI MPF Total Market comparing w/e June 9th to July 28th to 8 weeks prior to campaign).

“Retailers should be really excited about the continuation of the great partnership between Lucozade Sport and Anthony Joshua,” added Bell. “As interest builds toward Anthony Joshua’s potential next big heavyweight title fight in December, having the chance to meet the man himself will become an even more exciting prospect for shoppers!”

Lucozade Sport is supporting the new on-pack promotion through a digital out of home, social media and PR campaign. POS material is also available to help retailers raise awareness of the tie-up to their shoppers.