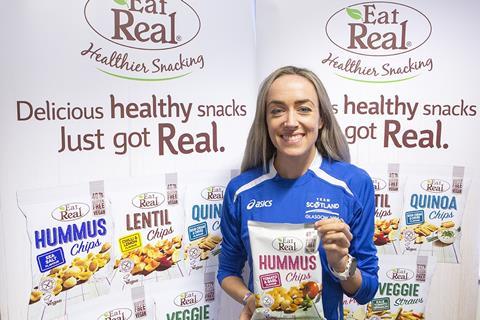 The two-year sponsorship deal will support McColgan, a successful middle-distance runner who has twice represented Great Britain at Olympic level, as she prepares to compete at the World Championships in Qatar in September and at the Tokyo Olympics next year.

“We passionately believe that what you eat is a big part of who you are and what you can be - so we are thrilled and so excited to be partnering with Eilish to support her in her quest for Gold,” commented Priyesh Patel, managing director of Eat Real.

“Getting people engaged with our values and reaching out to them so that they have the opportunity to share our passion is at the very core of what we’re about.”

As part of her ambassador role, McColgan will make a number of appearances alongside Eat Real at a range of trade and consumer shows and events - the first being the Allergy & Free From Show in London next month (July).

“I’m really excited to be partnering with Eat Real - I’ve genuinely loved the snacks for years,” said McColgan. “Tough daily training schedules can put your body through tremendous challenges so it’s crucial that I refuel with snacks that really deliver on taste but which don’t compromise my strict dietary regime.”