Pitch to the camping crowd

With the number of festivals rising, and camping still in fashion, stores can tap into a lucratic market for forgotten essentials and food to go.

The vagaries of the British summer may mean wellies and waterproofs one day, sunscreen and shades the next, but there is little that can put off the UK’s campers. The Camping and Caravanning Club reports that advance bookings at its sites are up 6% this year, and the burgeoning number of festivals for all ages and interests held around the UK means that camping isn’t going out of fashion.

All this spells good news for retailers, who can be ready to come to the rescue of those who have failed to pack the kitchen sink and are after the essentials in a hurry, not to mention those stores geared up to feed and water the happy campers looking for dinner for tonight.

Matt and Sally Croft of Croft Stores in Silverstone have found campers to be a lucrative source of business. Their store is close to the Silverstone race circuit, where race meets and pop concerts attract huge crowds throughout the year, and nearby campsites provide the perfect accommodation for those attending.

The Crofts’ move into camping equipment has been a gradual one, though. “People kept coming in and asking for things we didn’t stock, such as can openers, ground mats and frying pans. Noticing the demand we now have a store stocked with a variety of items and it’s now our point of difference,” says Matt.

Matt and Sally stock the basics such as toothbrushes and cups - and plenty of can openers, of course. “It’s the worst thing when you realise that you haven’t bought the right utensils to get into your tin of baked beans,” adds Matt.

Alongside this they have managed to fit in gas cylinders, coal, camping stoves, wind breaks and even tents. “We also sell BBQs in two sizes - small floor ones and pre-made standing BBQs which I put together in-store. They are hassle-free, perfect for families or large groups, and they retail at only £20.”

This may sound like a lot to stock in a small convenience store, but Matt and Sally think it’s worth it. “The returns are great and we rotate our stock according to the season. Plus, the equipment doesn’t have a sell-by date,” points out Matt.

Alongside the hardware, though, campers need food and drink and Matt and Sally make the footfall to their store work to their advantage with promotions on tempting items for campers. Matt says: “People who come in for camping equipment are usually distracted by our drinks deals and food offerings at the time and it encourages impulse buys.”

In David and Pippa Heritage’s Barns Green Village Store in West Sussex, food and drink is the main attraction for their holidaymakers. The store is close to a camping site and fishery, and the duo have found the tourists especially keen on local produce. “People come into the store looking to buy food, drinks and snacks, and because they are on holiday they seem happier to spend a bit more on good quality local produce,” says David.

Trade is bolstered by a well-stocked deli counter, hot drinks to take away and a large choice of 12inch pizzas which they cook to order in the early evening. Having the closest post office to the site also benefits as it offers a cash withdrawal service, encouraging more customers to visit their store.

Their offer isn’t restricted to food, though, as they also stock camping equipment. “The campsite is open 52 weeks a year so we always have a good stock of equipment. However, this increases during the summer months and bank holidays as they are our busiest times.”

David and Pippa don’t have as quite an extensive a range as Matt and Sally, but they stock bottle openers, cups, knives and forks, tea towels, charcoal and gas canisters. “It might sound obvious, but you’d be surprised how much people forget to pack,” adds David.

For Nick Farnsworth of Farnsworth News in Newport, the Isle of Wight Festival offers him a chance to tap into some spend of the 50,000-plus visitors to the event. “Alcohol is a big seller, especially in multi-packs or bottles on offer, so I always make sure I stock enough,” he says. “Soft drinks and BBQ items are also very popular, but it is hard to compete with the multiples. Many festival-goers stock up at larger stores before coming to the festival, leaving little room for us.” adds Nick.

Susan Nash, trade communications manager at Mondelez International, believes that snacking is an area retailers should be focusing on when targeting holidaymakers and festival-goers. “Consumers are likely to visit a convenience store with a view to purchase convenient on-the-go snacking items, particularly those that travel well and can keep them going,” she says.

Trailhead Fine Foods managing director Jason Howard believes its beef jerky fits the bill, describing it as a “healthy on-the-go snack which is rich in protein and low in fat”. He adds: “Beef Jerky is convenient and portable for hikers and campers.”

Chris King, management assistant at Budgens of Broadstairs, Kent, has just begun stocking the line and will be gauging how well it goes down with this market when the town is flooded with tourists for the annual Folk Week, a family-friendly festival held along the main high street in Broadstairs.

It includes music, dancing, entertainment and workshops, and people come from all over to attend. “Campsites are set up especially for the event as people want to stay for at least a few days, if not the whole week,” says Chris, “and our shop is situated at the top of the festival high street, very near to one of the campsites.”

He adds: “It is a great opportunity for us to sell to campers, but it’s also our only opportunity so we don’t stock a huge range for the rest of the year. Instead, we focus on the basic items which are usually forgotten such as toothbrushes and cleaning wipes.”

The main area in which Budgens of Broadstairs is able to capitalise on is food and drink. “We stock as many beer cases, soft drink multi-packs and food-to-go items as possible, knowing it’s these that are greatly in demand.” To enhance their offering, Chris and manager Adam also check out the latest Budgens offers in the lead-up to the event to secure the best deals.

Each year the store also joins in with the fun, while highlighting the business at the same time. “We set up a stall outside the shop to attract those walking to or from the festival. The stall contains our best local produce, from beers and ales to fresh food, and we even offer tastings. I have also been known to dress up as a children’s TV character and walk around the festival handing out free Cadbury Freddos,” adds Chris. 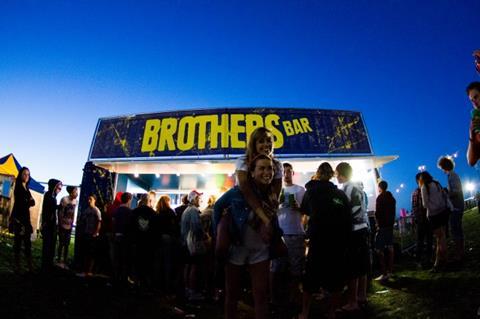 Brothers Cider began life at the Glastonbury festival 20 years ago when the family started selling their pear cider at the Jazz World Stage. Festival-goers kept asking if it was possible to get the drink when the festival was over and so the decision was taken to market it to pubs and stores.

To celebrate its 20th anniversary the brand is going back to its festival roots, attending Love Saves the Day, Godney Gathering, Collett Park and Glastonbury festivals.

The cider has also been given a festival-inspired new look and new flavour variants Strawberry & Kiwi and Coconut & Lime, as well as new pack formats including multipack cans.

Cheryl Sheppard, head of sales and marketing at Brothers Drinks, says: “By stocking a range of flavoured cider and festival-friendly promotional canned formats which offer consumers the chance to win a VW campervan, retailers can be sure to maximise sales.”

If there is a music festival near your store, these are some of the items festival-goers may well be heading your way for:

Brands get in on the acts

Festivals now play a key role in brands’ marketing plans, with many realising that the gatherings are a good way to reach target audiences and create excitement around their products.

This year Vimto is headline sponsor at the Fusion Festival in Birmingham in August. It is the first festival the brand has sponsored and it is backing its link-up with POS kits for retailers, ticket giveaways in the Midlands and activity at the event itself, where 40,000 people are expected to attend the family music festival.

“We chose Fusion Festival because not only is the drink doing really well in the Midlands, but we also have the same target audience: family. Vimto’s variety of formats in both fizzy and still appeals to the whole family, and with our extensive sampling activity at the festival we hope we can further build awareness.”

Poultry producer Moy Park is a sponsor of SportsFest 2105, a festival celebrating all things sporty in Buckinghamshire. To increase its profile, the company is offering consumers the chance to win a family glamping experience at the festival through an on-pack competition.