Spar has announced a new partnership with the Scottish FA, which will see further support for girls’ and women’s grassroots football across the nation. 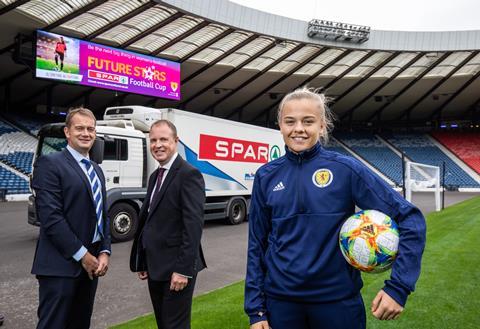 Spar ceo Colin McLean said: “Following the hugely successful launch of our sponsorship of the Scotland Women’s National Team earlier this year, this second partnership with the Scottish FA gives us the opportunity to run a grassroots programme with teenage girls in secondary schools across Scotland.

“Spar is passionate about sport and encouraging healthier lifestyles for young people. We are delighted to be supporting this programme which is specifically aimed at girls aged between 12-16 years of age. This partnership is a perfect fit for Spar Scotland and we look forward to encouraging girls to participate in local team football games. Hopefully we will see a future star in Scottish women’s football shine through.”

The introduction of the new cup competition is designed to encourage young girls to participate in the sport and build on the positive momentum in girls’ and women’s football.

Scottish FA chief executive, Ian Maxwell, added: “Interest in the girls’ and women’s game has never been higher and we are delighted that Spar recognise the opportunity that presents itself. By extending their support to include grassroots football Spar will work with us to increase the number of young girls across the nation participating in the beautiful game.

“We are very grateful to Spar for their commitment and look forward to inspiring a generation of young girls to love football with their support. The girls’ and women’s game in Scotland has gone through unprecedented growth in recent years, largely inspired by the success of the Scotland Women’s National Team in qualifying for back-to-back major tournaments.”