An on-the-go recycling scheme in Leeds city centre has been extended for a further six months after the proportion of people who disposed of target material in a recycling bin nearly doubled. 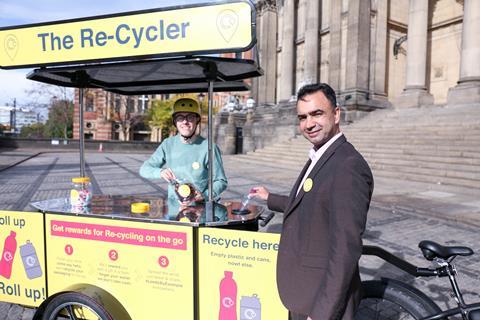 Leeds by Example - which includes a recycling reward element - was launched by environmental charity Hubbub and recycling compliance scheme Ecosurety, with the backing of Leeds City Council and more than 20 manufacturers and retailers, including the Association of Convenience Stores.

The initiative is set to be rolled out in Edinburgh and Swansea, as well as extended in Leeds.

ACS chief executive James Lowman said he would be feeding the findings into governments in Scotland and the rest of the UK as they develop Deposit Return Scheme plans.

Over the initial six months the number of people who said they disposed of plastic bottles, cans and coffee cups in a recycling bin increased from 17% to 32%.

The findings also revealed that, although 95% of people surveyed liked the idea of recycle reward machines, usage was motivated more by a belief in recycling than financial rewards - only 5% of the rewards vouchers were redeemed.

“Although few people redeemed the money-off vouchers, they are most effective in closed-loop, managed spaces with high footfall, where people buy, consume and dispose of food and drink packaging,” the impact report stated.

Lowman said: “We are pleased to be a supporter of the Leeds By Example campaign, to better understand the dynamics of on street recycling. The findings are clear that local collaboration, strong communications and robust recycling infrastructure are the key drivers of better on the go recycling.

“Locating recycling reward machines in a convenience store has provided useful insights into customers’ reactions and some of the logistical challenges with installing the machines.”