Labour’s General Election manifesto includes plans to outdo the Conservatives on frontline police recruitment, ban ATM charges and introduce a £10 per hour ‘Real Living Wage’ for all workers aged 16 and over. 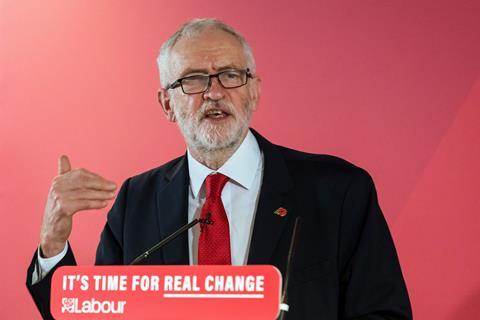 “We will re-establish neighbourhood policing and recruit 2,000 more frontline officers than have been planned for by the Conservatives,” it states.

It also pledged to toughen the law against abuse and violence in order to protect public-facing workers.

It would review the option of a land value tax on commercial landlords as an alternative to business rates, and develop a retail sector industrial strategy.

The party pledged to “rapidly” introduce a Real Living Wage of at least £10 per hour for all workers aged 16 and over, and help small businesses manage the extra wage cost.

In addition, it would ban zero-hour contracts and strengthen the law so that those who work regular hours for more than 12 weeks will have a right to a regular contract, reflecting those hours.

Within a decade it pledged to reduce average full-time weekly working hours to 32 across the economy, “with no loss of pay, funded by productivity increases”.

Corporation tax cuts under the current government would be reversed to below the rate they were in 2010 (28%).

For small businesses, Labour would ensure no quarterly reporting for businesses below the VAT threshold, and would not increase VAT.

Labour also pledged to stop Crown Post Office closures and bring Royal Mail back into public ownership at “the earliest opportunity”, reuniting it with the Post Office and creating a publicly-owned Post Bank run through the post office network to ensure every community has easy access to affordable banking.

On plastic reduction, it would make producers responsible for the waste they create and for the full cost of recycling or disposal, ”encouraging more sustainable design and manufacturing”. It also backs bottle return schemes.

As part of its objective to reduce childhood obesity, Labour would extend the sugar tax to milk drinks.

It has vowed to get “Brexit sorted” in six months by giving people the final say in a referendum – with a choice between a “sensible leave deal” or remain.