A.F. Blakemore has saved 500 bags of food from being wasted in the first week of trialling the food waste app Too Good to Go at 15 of its Spar stores. 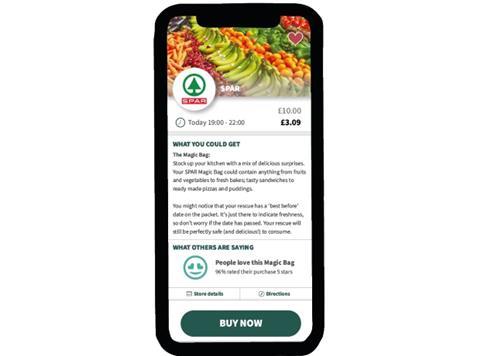 The Spar retailer started trialling the app at 15 of its Lincolnshire-based stores on 20 January.

The stores make up ‘Magic Bags’ of surplus fresh food and groceries on the day of expiry, which Too Good to Go’s 2.5 million users in the UK will be able to purchase for £3.09.

Customers are then allocated a time to collect their Magic Bag’ of groceries, thereby reducing the stores’ daily food waste and ensuring the food is enjoyed before it is past its best.

Under the terms of the app, products in the Magic Bags have to be sold at approximately three times less than the retail value, according to Too Good to Go co-founder Jamie Crummie.

Blakemore store operations director Chris Bacon said: “Blakemore Retail is dedicated to reducing its food waste and what better way to do this than with an app that will also allow our customers to get some fantastic deals.”

Too Good to Go UK country manager Hayley Conick added: “We are delighted that 15 of Blakemore Retail’s Spar stores have joined our growing community of partners in the UK, with the prospect of more to follow.

“This partnership bolsters our fight against food waste in the UK, enabling us to make an increasing dent in the £13bn of perfectly edible produce that goes to waste each year. These stores operate at the heart of communities, so it is through relationships such as these that we can fight food waste together at a local level.”

Blakemore Retail plans to register more stores in the future if successful.

Elsewhere, Nisa is encouraging its members to sign up to the app. Walsall-based Nisa retailer Amrit Pahal said he had eradicated food waste since signing up to the app in early January, while also boosting footfall.