Suffolk Brewery St Peter’s has refreshed the recipe of its Without brand of zero-alcohol beer. 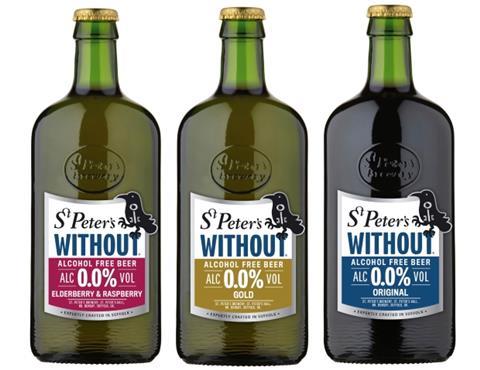 The company says that since launching in 2016, the St Peter’s Without brand of 0.0% alcohol craft beer has built a strong following of loyal customers, but changing consumer motivations have prompted it to refresh the recipe to appeal to a new range of potential customers.

“When we first launched Without, it was one of very few zero-alcohol craft beer products available in the mainstream and it has been incredibly popular, but we want the brand to continue to reach across all age groups and motivations,” explained St Peter’s Brewery managing director John Hadingham.

“A lot has changed in four years. No and low is appealing to more and more younger consumers and tastes are changing. We’ve seen a growing trend towards full-bodied IPAs, for example, and trade and consumers have been telling us they wanted a refreshing zero-alcohol beer that has hoppier flavours. We’ve been experimenting with our liquid and feel we’ve achieved something that will not only appeal to our current consumers, but also attract the new and discerning no- and low-alcohol purchasers.”

Changes have been made to the profiles of Without Gold, Without Original and Without Elderberry & Raspberry, which launched in June. The company said that although the taste will remain largely the same, new hop profiles provide more hop-forward aromas and subtly improved taste characteristics. “However, we have been careful not to stray too far from the current profile so as not to alienate our current loyal consumers,” Hadingham added. “We have benchmarked the new liquids against many others on the market through consumer panel blind tastings and the results have been very positive indeed.”

The relaunched Without Original, Without Gold and Elderberry & Raspberry will be available to retailers from January 2020.