How I made £900 profit with my Easter Bunny experience 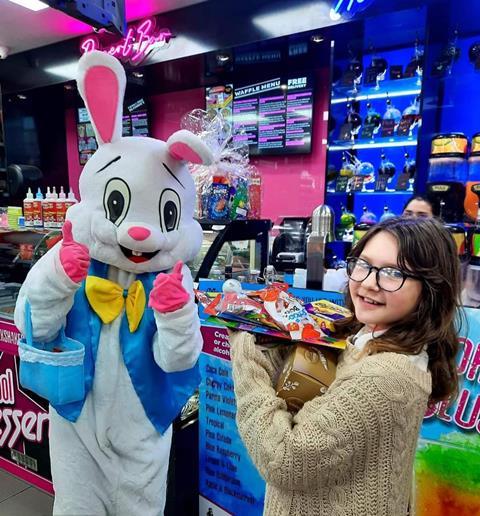 With many kids’ activities closed due to lockdown and parents stuck for ideas on how to make Easter special, Greater Manchester-based Mos Patel came up with an egg-cellent solution.

“We did a Santa’s grotto-type event with the Easter bunny,” explains the owner of Family Shopper Broadoak, Ashton-Under-Lyne, and Premier Heyside in Oldham.

Parents had the option of booking a visit slot at the store, or having a bunny visit their home and presenting their children with Easter treats. “We spent £160 on costumes, then promoted it on social media,” he says.

Initially, Mos wasn’t convinced that people would buy into the idea, which was the brainchild of manager Lydia. “When we first started it we thought it would be a flop,” he says.

To Mos’ surprise, parents jumped at the chance to treat their kids, and staff were quick to upsell plenty of extras. “We charged £4 for the first child, and £2 for the second, then parents would pay for whatever products they wanted the bunny to give the kids.

“When they called [to book], the staff were engaged with them - they told them what eggs we had (starting at a minimum of £3) and asked if they wanted anything extra, such as our Easter mini egg milkshakes (which are £4 each), or cake slices and toys from our large kids section.”

It quickly became clear that Mos was onto a winner. “A lot of houses we visited had three or four kids - you’ve already hit 30 or 40 quid!” says Mos. “The kids loved it! We made £900 profit and our Facebook likes increased to over 10,000.”

In addition to visiting children, the bunnies brought gifts to elderly people in the community for free to bring some good cheer.

The success of the event has spurred Mos on to plan further events. “We’re going to do a BBQ in the May bank holiday with Polish and Russia sausages,” he says. The event will be attended by a host of characters, including: Mickey Mouse, LOLs and Belle from Beauty & the Beast. “We’ll have a stall where customers buy from and 50p from each sale will go in a charity box and that money will go to poorer customers,” he adds.