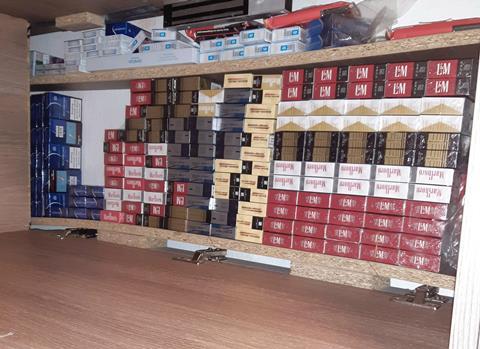 Three stores in the Kidderminster area have been found with illicit tobacco for the second time in a month.

An investigation by Worcestershire Trading Standards, in partnership with Kidderminster Safer Neighbourhood Teams (SNT) found a illicit tobacco concealed on the premises of the three stores.

This morning our Trading Standards Officers revisited the same Kidderminster shops we found #illegaltobacco at on 10 March 2021 with @KMinsterCops
Look what we found!
Neatly concealed, but we still found it. pic.twitter.com/ue4JkreC0b

“A quantity of cigarettes and hand-rolling tobacco were found in a sophisticated hide. This visit follows on from other visits in recent weeks to shops in both Kidderminster and Worcester where significant quantities of product were seized. The investigation is ongoing with the view to taking formal action if appropriate.”

Reporting on that incident, PC Matt Ling from Kidderminster SNT said: “We visited three supermarkets and stores within the Kidderminster town area, following reports of counterfeit and illicit tobacco being sold.

“A significant amount of counterfeit tobacco was seized by Trading Standards and following a search of a vehicle associated with one premises, we found and seized an extendable baton.

“Operations like this prove that working in close partnership with our partner agencies we are able to prevent criminal enterprises from continuing their distributing their products such as tobacco and alcohol.”