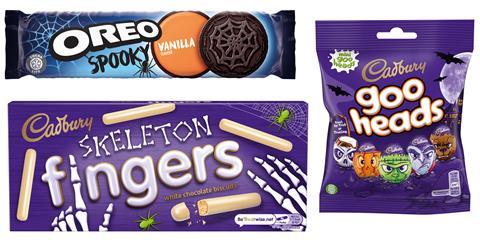 Mondelēz International is bringing back some seasonal favourites this spooky season.

”Confectionery now outsells pumpkins in the run up to Halloween (Kantar Worldpanel), so a strong range is essential for any retailer come October-time,” claims the firm.

Treatsize chocolate bags, such as Cadbury Dairy Milk Buttons, Cadbury Fudge, and Cadbury Crunchie, are always a popular choice for shoppers hosting gatherings or catering for trick-or-treaters, notes the company. Mondelēz International’s treatsize range grew ahead of the category by over 54% last season (NIS Data).

Oreo Spooky Biscuits are back for Halloween 2022. They have orange-coloured, vanilla-flavoured creme middles featuring a special spider-web embossed detail.

Also returning for this year are Cadbury Skeleton Fingers, which sees Cadbury White chocolate and crispy biscuit in a convenient sharing box.