Tesco has opened its ninth Jack’s store, in Rawtenstall, Lancashire, as it seeks to expand the discount chain’s reach across the UK. 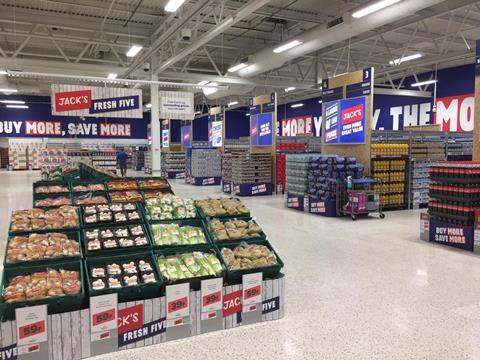 The store is the largest Jack’s to open so far, and replaces a former Tesco supermarket which closed down in January.

The large warehouse-style interior with “no fancy fixtures or fittings, and no added extras” has a strong emphasis on bulk packs and the Jack’s multi-buy proposition, which is backed by heavy ‘Buy More, Save More’ in-store messaging.

The range includes Jack’s own brand items alongside mainstream grocery brands and general merchandise products such as TVs, irons and scooters which are sold on a “When it’s Gone, It’s Gone” basis.

The store also features Jack’s Shop Smart scheme which enables shoppers with the app to scan and pack goods as they shop and track spend.

When they have finished shopping, customers use their phones to pay by scanning a barcode on one of the store’s many self-service tills.

The eight other Jack’s stores are located in: Middlewich in Cheshire, Chatteris in Cambridgeshire, Castle Bromwich in Birmingham, Rubery in the West Midlands, Immingham in Lincolnshire, Barnsley in South Yorkshire, Edge Hill in Merseyside and St Helens in Merseyside.