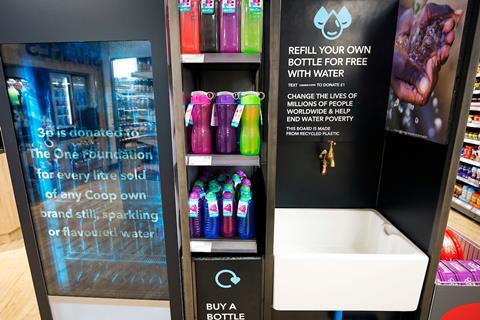 Eight of the top UK supermarkets sold more than 1 billion plastic water bottles last year, according to analysis by the Environmental Investigation Agency (EIA) and Greenpeace.

The environmental campaigners are calling on retailers to join the “refill revolution” by offering water dispensers across their stores, and not just in cafés or new-builds.

According to the study, none of the top 10 UK supermarkets offer water dispensers across all stores for customers to refill their own reusable bottles.

The Co-op and Iceland have both started trialling water refills in stores, but shoppers at Tesco, Aldi and Lidl currently have no access to water refills.

A number of independent retailers, such as Spar Winford near Bristol, have started to offer free water refill stations. Manager Emily Parker said its refill station was helping to drive footfall by attracting local cyclists.

“We introduced the refill station over the summer and ensured that it was well-promoted with signage both inside the store and outside. Customers have responded really positively, and it’s already heavily used,” she said.

Commenting on the supermarket findings, EIA ocean campaigner Juliet Phillips said: “Single-use water bottles might seem convenient but their impact on the environment is anything but.

“There’s untapped potential for a refill revolution in the drinks market. We urge supermarkets to work with brands to make these options available and accessible to customers across the country.”

Greenpeace ocean plastics campaigner Fiona Nicholls added: “Plastic bottles and caps are the top plastic items polluting our beaches, yet despite this UK supermarkets keep selling more and more of them. This has to stop.”