Southern Co-op stores across Bristol and North Somerset have raised more than £10,000 for a regional children’s hospice so far this year – helped by some inter-store competitiveness. 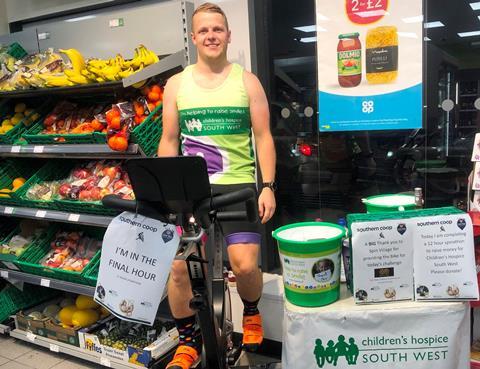 In September alone staff at the 18 Southern Co-op stores in the region raised £2,863 for Children’s Hospice South West after competing to raise as much money as possible for the charity.

The winners were the Bath store, which raised funds through a variety of activities including a static bike ride by store manager Ben Langford-Young.

He raised £416 during a 12-hour, 178-mile static bike ride. Other fund-raising activities at the store - which raised a further £291 - included ‘guess the sweet in the jar’, bake sales, book sales, raffles, and ‘round up your receipt’.

Children’s Hospice South West cares for children with life-limiting conditions and their families by providing respite care and short breaks, as well as emergency, palliative and end of life care from its three hospices.

Langford-Young said: “We might be a co-operative but we are more than happy to get competitive when it comes to local causes.

“But we had no idea how much we would all raise. It was really special when we saw all the different amounts start adding up. Every store has made a difference.

“The hospice does so much for children and their families. We would like to thank everyone involved. Our local communities are very generous.”

The stores have previously supported the hospice this year by donating more than 200 Easter eggs, making an additional £5,000 donation for 18 new bikes, and volunteering more than 120 hours at the hospice, its shops and its fundraising events.